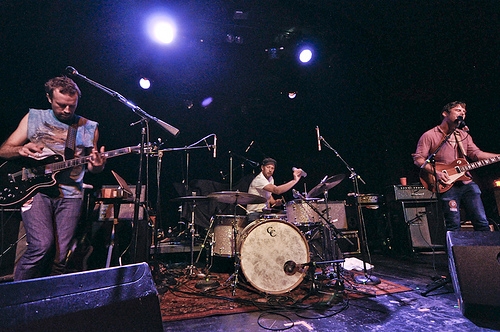 Don't miss: Plants and Animals {this Thursday at the Crocodile}

My love affair with Plants and Animals is glittery and vast, and spans back to a fateful day at South by Southwest back in 2010. If you were in Austin that year, you remember it well: a seeming thirty (I exaggerate, but still) degrees below the rest of the week's "normal" temperatures, windy as all get-out, and absolutely not the day for the only clean-ish thing for me to wear being a blue and white polka-dotted summer dress — but that was indeed the case. After battling Chicago-worthy windtunnels between buildings on otherwise innocent-seeming side streets, I found myself outside of a packed venue trying to talk my way in to a capacity show: Okkervil River was playing with Roky Erickson out on the back patio, and Patrick Pestorius just happened to be standing inside the door rocking out to the band playing in the front room. Hoping against hope that he'd remember me from the one very brief moment we'd met at the Showbox two years prior, I got his attention and somehow managed to charm my way in to the venue, planting myself sidestage along next to him.

Wide-eyed and instantly blown away by the gritty, big-guitar laden, all-out indie rock that these guys were pumping out on to the crowd, I thought to myself, what the fuck! who are these guys? but apparently, back in real life, I'd actually said it out loud. "PLANTS AND ANIMALS," Patrick shouted back over the din. "I KNOW, RIGHT?" We both nodded in approval and stood there, mesmerized as the band slayed on. It's all a blur after that, as are most South-by trips — but Patrick left at some point to go prep for the set with Roky out back, the wind died down, and all was right in the world that day in Austin.

Cue arrival back in Seattle and obsessive Googling for dates for / albums by the bands I'd learned about that year from the trip and some friends there (P & A among them, along with the now-notable First Aid Kit, Good Old War, the then-newish Local Natives, already-favorites the Middle East, and so on) and I stumble across this, on the KEXP website. Of course. Undoubtedly one of the best single tracks from a band in recent memory, "Tom Cruz" completely and immediately packed in everything that Plants and Animals were capable of: shredding full-frontal guitar riffs, that mesmerizing otherworldly melodic place that they were capable of venturing off to, and everything in-between that makes their brand of rock rock. Later that year, I was thrilled to see them middle slot for the Frightened Rabbits show at the Showbox, and minus the din and the blustery weather, they were every bit as good (if not better) than the showcase in Texas.

Which all leads up to the point (yep, I have one! Swear!): Plants and Animals are playing, here in town, tomorrow night {that's Thursday, March 23rd} at the Crocodile, and you'd be a fool to not check them out on such a stellar stage. It's a 21+ show, tickets are only twelve bucks, and based on the vibe of the newest track, they've gone even further down the path of their one-of-a-kind type of sound.

Little Scream and Let's Get Lost will be rounding out the bill. We'll see you there!

{Photo of Plants and Animals at the Showbox by Victoria VanBruinisse.}