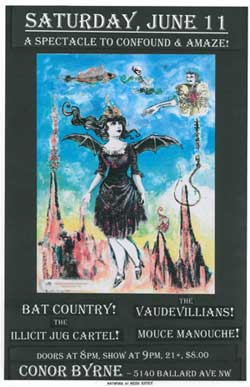 Don't Miss Shows Thru The Weekend! Eighteen Individual Eyes, Can You Imagine?, The Tripwires, and Bat Country

My ass is sore from SIFF, damn it! I need to get up and move around a bit! And not just between theaters either. Hmm, maybe I’ll go see a show or two this weekend. You know, live music! Cold whiskey in hand and a bunch of ragamuffins caterwauling on the bandstand action. It’s been a little while.

Last week, I saw the ecstasy-inducing super-boss musicians for the Winter’s Bone OST at the plush Triple Door, and that was regally rustic and rootsy divine. But now I’m hankering on some more contemporary sounds, if you will. Let’s check the trusty TIG calendar and– OH MY GOD! So many great groups are playing this weekend! I am going to list my very favorites and I hope to see ’em all. (Wish me luck.)

Empty Space Orchestra, Gun Runner, Eighteen Individual Eyes, Maps on Fire are playing The Funhouse on Thursday, June 6, starting at 9 p.m., for six bucks. I will be there to see EIE mostly though, as these four women know how to create strong tendrils of sound to drill straight into the nervous system, creating both suspense and pleasure in the way only dangerous, driven rock and roll can. Rumor has it they’re recording with Matt (“Botch”) Bayles for their next record, and that is gonna be some heavy, beautiful shit.

Next, let’s give a big hug to Scott at the Triple Door for bringing in Neil Innes this Friday, June 10. Neil worked with Monty Python and was in the fun and freaky Bonzo Dog Doo Da Band and later on, the “brill” (ho!) Beatles parody The Rutles. I have a couple of BDDDB LPs and they are hilarious and delightful. I actually first became aware of The Beatles through his astute and sizzling caricatures of them in The Rutles, which like that Lenny & Squiggy solo album on Rhino was something you had in your collection along with 45s by The Damned and Chinas Comidas. Yes, I’m antediluvian. (7:30 p.m., $15 advance, $18 day of.)

The same night though (horrors!) my favorite quasi-girl group on turpentine fumes and candy bars Can You Imagine? will be roiling and grinding out some mind-bending go-go boot rock with howlingly excellent lyrics back at The Funhouse, along with the most dapper-sounding power poppers in Seattle, The Tripwires. Both of their albums were absolute favorites of mine this past year: In any other city they came out in, they would have made the covers of both alt-weeklies. They’re opening for the Cute Lepers, who I hear are amazing but no one ever sends me their records (HINT HINT). Do they even have records? I don’t know. But the show starts at the much too appropriately named The Funhouse at 9:30 p.m., and costs eight whole doll hairs. (Do you say it like that too?)

Lastly, just because it’s the latest of all of these, happening on Saturday night, but will probably be one of the most thrilling shows of the year for me, is Bat Country playing Conor Byrne Pub this Saturday, June 11. Bat Country are effervescently bone-rattling spellmakers, indescribably shrewd with wit, charming in demeanor, sensual and mystical, like a small cell of bad-ass bards and burlesque babes unleashing back alley philosophy in absinthe-soaked little bubbles into the faces of officers they’re swiping wallets and badges from. I adore this band to death, and the fact they also have fellow scribing knife-scribblers and warblers Illicit Jug Cartel, The Vaudevillians, and Mouce Manouche on the bill makes that trail off the old main Ballard drag the place to be halfway through this weekend. (Eight sheckels, boychicks and chickadies.)