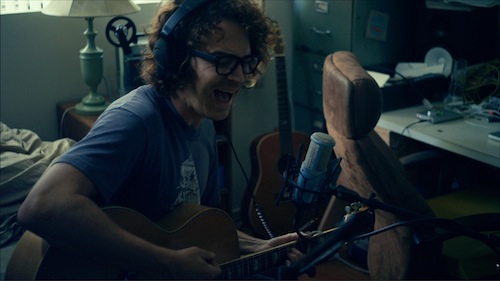 SIFF Take: I Am Not a Hipster

{I Am Not a Hipster screens at SIFF June 7, 9:30pm and June 8, 3pm at SIFF Cinema Uptown. Director Destin Cretton is scheduled to attend}

Indie Rocker Brook (Dominic Bogart) spends a lot of time and energy avoiding fame and super fans of his self-recorded debut album. He’s not very nice to his friends, he throws public tantrums about his ex, and he uh, doesn’t want to do any publicity. Okay. Dude? In other words, he’s kind of a dick. Who is apparently NOT a hipster. That much we know.

And then his trio of beautiful sisters comes to visit him in San Diego and we learn why he’s kind of a dick. His mom died. And his dad and him had a fight about it. And he left.  And he has in no way dealt with his feelings about it, except for through his music. And then oh man. I guess that means we can’t hate him anymore, huh?

Though it's not a perfect film, there’s an authenticness to I Am Not a Hipster that I can’t quite pin down—I think it’s because it’s layered with lots of severely amazing music. The tunes are by Joel P. West, who created an entire album for the fictional character of Brook (Bogart does actually sing them in the movie), called Canines, which you can listen to for free! I’m sort of wishing West would tour with these songs. I like them that much.

Recommended, even though it’s pretty depressing. Just because it feels so real—and the music is so, so, so great.