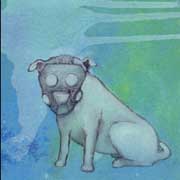 The perfect memorable rock voice evokes both awe and envy with every listen. Folks like Kathleen Hanna, Frank Black, PJ Harvey and David Bowie make it look easy to skew the mortal voice with equal parts umph and finesse.

Likewise, Dorkweed's frontman, Brent Amacher, also has the ability to growl and croon {a la Iggy Pop}. On the Seattle band's sixth release Some Animals Die, his cool coarseness melds with the high-powered pop melodies sniff of Pixies' crankiness and Weezer's tongue-in-cheek silliness.

With the majority of the tracks clocking in at or under 2:59, the varied collection of crunchy, edgy-pop-like songs flow from emotive introspection {"I am Dead" and "Clouds,"} to cantankerous quirkiness {"Duck Huntin'," "Jack Rabbit," and "Cream Corn"}. It would seem there is an almost child-like interest in morbidity, as four songs have a word connected to the concept of death in the title. Whatever the case, it's obvious this band does not lack a profound sense of humor.

On "Rippin' My Heart Out," Brent sings of lust not fully realized as his enviously gravelly voice espouses, "It might be what I need, this might be what I deserve." The crunchy guitar riff and surprisingly excellent use of cow bell perfectly blend to form an ass-shaking hook that climaxes when a sweet female vocal chimes in, "This is how it goes," over sweet Beatlesque horns.

The band's latest 5-piece lineup includes former members of Peter Parker and The Tremens. It also boasts a somewhat unique double-drummer set up. However, don't be frightened — the dual drumming isn't gimmicky sounding, nor has it spawned the endless wankering jam á la the Grateful Dead. Instead of flooding SAD's tracks with excessive cymbal crashing and skin smashing, the extra percussion thickens the production's richness without sounding slick.

Perhaps we can each make the acronymed title take our own meaning. In my case, I'll refer to it as, "Savory And Daring."