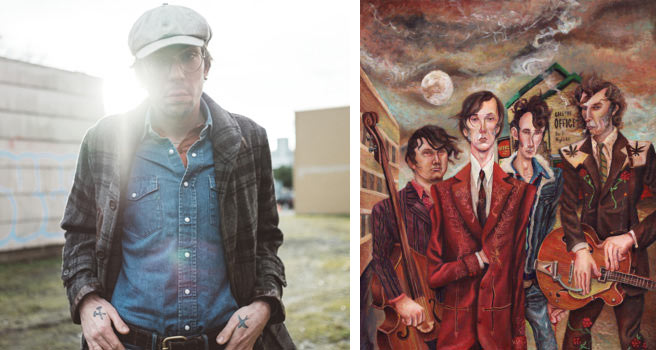 Double-Barrel Show: Justin Townes Earle and The Sadies at the Neptune Theatre {May 30}

Justin Townes Earle will perform at The Neptune Theatre, with special guests The Sadies and Sammy Brue, on Tuesday, May 30, 2017 (get tickets / more info).

“I certainly don’t blame the public for never having heard of me,” The Sadies singer and guitarist, Dallas Good, recently told the Salt Lake City Weekly. I kind of blame the public, though. After all, Dallas and his brother have been at this thing for 20 years – bending ears as the best Canadian band in years and as the backing band for Neko Case, Jon Langford, Andre Williams, Gord Downie, John Doe, et al.

Where The Sadies shine brightest, though? In any context, really, because they’re always running Dallas’s crunchy, psych-reverb tinged telecaster up against his brother Travis’s clean-beaten Gretsch Streamliner. Like the still-chipping-away Meat Puppets (another brothers-band), it’s hard to categorize The Sadies, other than to haul out some pedigree: They started on Bloodshot Records with a droll, guitared-up psych boom that drew as much from garage rock as from surf as from bluegrass and alt-country (shit, they come from Good family stock, as in Canada’s The Good Brothers, as in Canada’s answer to Gram Parsons and Townes Van Zandt). They’re tearing deeper into a couple decades of albums and tours, blasting bands off the stage at every turn.

What’s more, The Sadies come packing an additional punch: Justin Townes Earle, who’s got his own pedigree (as in Steve Earle) and his own new tunes, Kids in the Street (New West). Earle’s gotten better and better with age, settling into a rough-hewn alt-country shuffle, grit-speckled and confessional even as the tunes run off like a Memphis soul spray that runs up against thickets of crunchy guitar riffage.

Musically, this, in fact, is a perfect set up for The Sadies, who will step out again after opening for Earle and play as his backing band. Looked at one way, the evening is a stupendous chance to get a double-barrel load The Sadies. Looked at another way, the evening’s a magnificent chance to simply get a double-barrel load of freakishly good tunes.