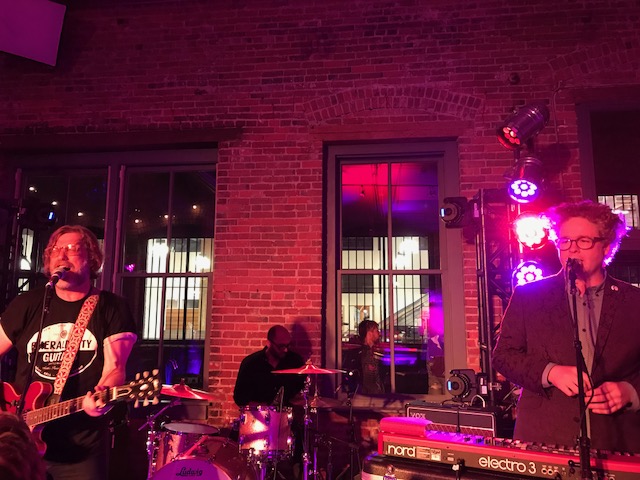 The recent Long Winters show, as part of the first ever Upstream Fest, served as the class / family reunion of my dreams. A gathering of some of my most favorite people, in a smallish artsy exposed brick space, for a show of one of our favorite bands was a brilliant alignment of indie-cultivated stars and planets.

Was it the atypical intimate venue, the early set time {it’s great when a show starts *before* one’s bedtime}, the crowd, the band, the songs, the banter that included a promise of kazoos for sale after the show? Yes. To it all… but especially to the band.

Even though the band’s line-up that night was a first – featuring 4 previous members of the band whose tenure in the band actually never overlapped – the team of John Roderick, Sean Nelson, Eric Corson, and Nabil Ayers was THE BEST. Each of those fellas are A++++++ in their own right, but combined their talents astound.

The night’s festivities inspired Dana and I back to the place we are most comfortable – at the front of the stage for one of our favorite Seattle bands. It also brought out many of our favorite people who we haven’t seen for way too long {thanks, adulthood, for getting the way and keeping us apart}. It wasn’t only a Long Winters reunion – it was a much-needed reunion for all of us who love them.

A look at the set list will make most KEXP-loving Seattle-ites weak in the knees:

The real treat was the affection and elation that poured with each note and each narrative exchange. My greatest hope from the night is that, as was slightly forcefully promised, this is a warm-up to another show.

My second greatest hope is that someone finds or shares a video of the night’s version of “New Girl.” The 5+ minute exchange of who is “ARE” made the world, for a moment, as gleeful and carefree as it was in 2003.

One of my favorite parts of the evening was an unplanned “team-building exercise.” As the fourth song started, no one could seem to remember the first line to “Cinnamon.” The instrumental played and John came over to our group up front to have us recite it back to him. To our despair, we all went blank. Our one chance at singing a favorite lyric back to John and we froze.

Sun through the curtains,
I gave you a sign,
The birds were all quiet,
You were so quiet…

The speed bump cemented the connection and camaraderie of all there. It was a present of being present. It’s like when someone breaks up laughing in a SNL skit – it’s so live and real and disarming, it becomes inclusive.

Throughout the set, the band seemed to be at their most comfortable, their most adroit, and – I hope – feeling their most loved. These are sad and crazy times. It’s important that we keep connecting, keep relishing in the songs and artists that comfort us.

And, speaking of favorite people in the room, can we get an award trophy for Scott Rosen for bringing and sharing a portable phone charger? I feel like the last time I *did a festival* was before my dependency on a cell phone – so his charger was a lifesaver to make sure that Dana was able to capture video of “The Commander Thinks Aloud” in its entirety on video.

As Dana explained: I always assume each Long Winters show is the last. So here is the finale of the final song of what may have been the final performance. It took eight minutes to complete “Commander.”

Big thanks to the organizers of the Upstream Festival for properly coercing the Long Winters back onto the stage. Biggest thanks to everyone on the stage and in the crowd that made the evening as brilliant as we had hoped.