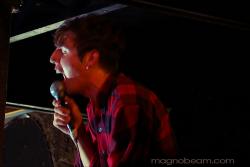 My goal of this year’s South By Southwest Festival (which ran from Wednesday, March 12 through Saturday night 2am, March 15) was to maximize my time and memory-making opportunities while still remaining fresh and wide-eyed for each performance. In other words, I didn’t want the 95 degree weather, (possible) over indulgence the night before, lack of sleep, or achy feet get in the way of giddiness for each performance. Even though a show could be the 35th band I saw that day, *that* show could be the best yet. And in a few cases some of the shows I saw at SXSW actually turned out to be my favorite things ever.

To capture the mayhem, giddiness, and manic good times, I’ve put together my SXSW Superlatives (everyone deserves a reward!) to recap the choicest five days of 2008 yet.

I’ll be posting new superlatives every few days so check back for more ‘awards.’ Also, check out the SXSW coverage I was part of with our friends at Groupee.

* Best use of WAH WAH Pedal: A Place to Bury Strangers*
(Wednesday, March 12 at Mohawk, inside)

It was an interesting twist that Brooklyn, New York’s A Place to Bury Strangers would be the first band I saw at SXSW. Their dark songs against the contrast of the high energy of the early afternoon sunshine crowds was the best of both worlds SXSW dichotomy I look forward to each year. The band’s sound weighs heavily on the eeriness of Joy Division and the Black Angels side of Jesus and Mary Chain; they filled the brightly daylight lit club full of reverb, and lengthy swirling guitar instrumentals. Each song was a scene in a master plot they built up through the set, which they progressively worked up into a cataclysmic crash of percussion and heavy bass. Once the audience was wrapped up in a sonic hurricane, the group suddenly released us into a fuzzy morning-after hum to carry with us to the next show.

I guess it should also be noted that as we were making our way out into the street after this show, Michael Stipe walked by us (he was going into the Mohawk!). Sure, I could have chased him down to get a picture with him or exclaim how much he’s changed my life, but I thought that he wouldn’t respect me any more if I did that. I can’t imagine living a life in which Michael Stipe didn’t respect me. (photo by: Chris)

* You said I'm good looking and you're a great dancer, therefore I love you: YACHT*
(Wednesday, March 12 at Emo’s, outside)

This superlative could also be called “Erik Gonzalez you were right,” since last year Erik raved about YACHT and how worthy they were of all those capital letters and critical acclaims and opening slot on the Vampire Weekend tour. I learned at this afternoon’s show that Jona Bechtolt is more than a mere laptop mastermind. The guy’s true superpower is in his ability to create an intimidating feel good dance party on a dime. Within two seconds of his beats hitting the ground, he and his YACHT partner Claire lay their infectious straightforward lyrics over part Nintendo / part Wire melodies, and the crowd’s spirits lifted to a near slumber party enthusiasm. Strangers were jokingly doing dance routines together and smiles covered the sea of bobbing heads (one even wearing a pink fur bear hat).

At one point Jona reciprocated the room’s affection by starting a song off with the statements, “You are very attractive people. You are very good looking people.” And of course I’m a sucker for any song that repeats the chorus “Everything is fucked so what we going to do.” The show ended with an indie rock dance circle lovefest as the crowd broke out their best moves as center stage turned inward when Jona made his way to the middle of the audience. It was a sad moment when I realized it was over. But I was comforted that although they’ll be on tour for what feels like the next 25 years, that they will surely return our way since they’re registered Portlanders (OR). (photo by: Chris)

* Best Meet-up with an Old Pal (yea, I'd like to think we're friends): Wedding Present
(Wednesday, March 12 at Emo’s Annex)

Sure I’ve seen The Wedding Present (or variations thereof) in several locales in North America and the UK, yet my heart still jumps at the thought of seeing Gedge and co. perform. This afternoon it was an acoustic duo of David Gedge (vocals / guitar) and Terry de Castro taking on TWP catalog. They covered the entire catalog over the course of the short set and even gave us a sampling from the forthcoming El Rey (set for US release on Matador Records in May). I loved the mixture of the stripped down snarling of David’s electric guitar and the intimidating bass guitar, as it only enhanced the rawness of the vocals and intensity of each song’s storyline. The songs took on a whole new dramatic nature that was eaten up by each of the seasoned TWP fans in attendance. While they blew through renditions of “Drive,” “Spiderman,” “Suck,” and “Montreal” (a personal favorite), it was the opening jangles of “My Favorite Dress” that really threw the crowd into hysterics and tingles. The set ended with another classic, “What Have I Said Now?” which rounded out the set with its ferocious guitar-jangle diatribe. (as seen in the YouTube Video above)

Another exciting Wedding Present-related tidbit: I was able to interview the band before the show. We’ll be posting that interview in the next few weeks!