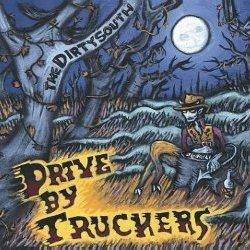 A red-state band with blue-state tendencies, the Drive-By Truckers devote most of their latest album to tales of the disadvantaged. The band come stomping out of the gates with "Where the Devil Don't Stay," a son's recollection of his father, a moonshiner servicing wealthy patrons from his stump in the woods. This track encompasses the dual themes of The Dirty South: the lengths to which some men, especially in the depressed American south, have to go in order to provide for their families, and the class struggle that drives them there. Obviously not happy thoughts, and this album does in fact take a darker turn from 2003's Decoration Day. Though there are a number of DBT's trademark hard rockers, the overall feel has a more somber, alt-country feel than its two immediate predecessors.

There has been yet another membership change, with Shonna Tucker assuming bass duties, but the triple-guitar front line has stayed intact since Decoration Day's addition of Jason Isbell, and the band have never been in stronger form. Isbell turns in the album's strongest track, a stunner of a ballad called "Danko/Manuel," using the deaths of the titular Band members to ruminate on those times when life on the road seems both endless and futureless. But all three singer/songwriters contribute strong pieces: Patterson Hood with the atmospheric "Tornadoes," howling electric guitar drones over strummed acoustics virtually conjuring rainclouds, and the angry working-man's diatribe "Puttin' People on the Moon"; Mike Cooley on the country-pop tribute to Sun Records, "Carl Perkins' Cadillac," and the gutbucket NASCAR twanger "Daddy's Cup"; and Isbell again on the anthemic folk-song exploration of "The Day John Henry Died." Band co-founders Hood and Cooley also collaborate on a three-song cycle concerning Sheriff Buford Pusser, the "hero" of Walking Tall, taking the opposing viewpoint: if Pusser's tenuous grasp of the law could be justified by his gang-busting results, then why don't the ends justify the (criminal) means when the ends are feeding a poor man's family?

Released less than three months before Election Day, The Dirty South is just the impassioned, politically-charged CD to get you fired up en route to the voting booth and continues the Truckers' reign as the smartest and, well, simply the best damn rock 'n' roll band in the country. Make sure to see 'em live.