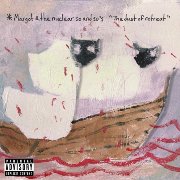 Margot & The Nuclear So and So's

The Dust Of Retreat

On The Dust of Retreat, the first full length from Margot & The Nuclear So and So's, Singer-songwriter Richard Edwards creates an ambitious pastiche of pop song-writing that will leave both casual listeners and us hardcore snooty reviewer types with their ears thoroughly perked up and waiting for more. With an eight-piece band including horns and strings backing him up, Edwards veers from quiet, emotionally intimate heartbreakers reminiscent of now-defunct Seattle locals Carissa's Wierd (album-opener "A Sea Chanty of Sorts," "Jen Is Bringing The Drugs"), to upbeat, unpredictably hooky folk / pop ("On a Freezing Chicago Street," "Skeleton Key") to full on bombastic rock ("Quiet As A Mouse").

There are flaws in the effort, to be sure; In its execution, for some reason, the latter of these stylistic choices veers a little too close to Coldplay for my ear, and occasionally Edward's voice has a somewhat too-breathy / too-pretty quality to it which can drain it of its obvious sincerity, but even these minor faults put the overall excellence of the album as a whole into starker contrast.

When at its best ("Chicago Street," "Jen"), The Dust of Retreat is a stunning mixture of small day to day triumphs and tragedies told in slice of life vignettes that occasionally even dip their lyrical toes into the same pool of greatness as early Leonard Cohen and swelling, stirring instrumentation that envelopes the listener and explodes the deceptively simple songwriting, calling to mind nothing less than the heartfelt grandiosity of Simon & Garfunkel's Bridge Over Troubled Water.