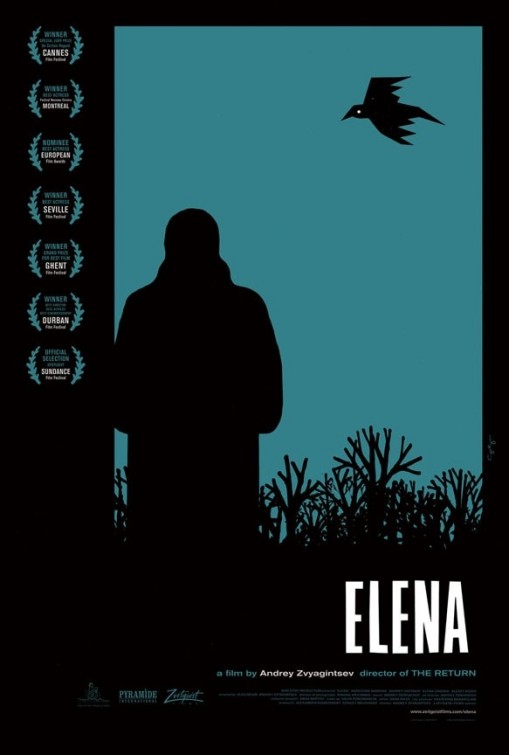 Elena is a slow moving but extremely well made film that details the choices people can make for their family when their back is against the wall. Or maybe it's an allegory about post-communist Russia and how everything is just business, even marital relations. Perhaps simply an advanced exercise in producing an effective noir mood onscreen. It's one or many of those, but not an entirely satisfying experience. I saw all those pieces in play, each rendered precisely — even memorably. But without a hook that truly engaged me in the experience, so I was left admiring the craft but not the overall film.

There are far, far, FAR worse film choices to be made out there. Surprisingly, in some ways, Elena simply didn't stand out as much as I would have hoped from the crime and (maybe) punishment type description I'd heard of the work.

Elena is the wife of a wealthy man. Younger than him, we generally see her acting more servant than spouse. Their relationship seems almost transactional, so it's not a total shock that she's from a lower economic circle and has married up. They met ten years earlier when she was his nurse during a hospital stay. Each has a child — she a son with a family, he a daughter who's unattached and a paternally described hedonist. Neither is particularly adept at paying their own way in the world, and are dependent on their parents. Even though both are adults and Elena's son has a wife and two children.

Eventually there are enough clues to suggest Elena loves her husband though is far less than thrilled with his unwillingness to help her family out financially. Some of the best scenes are the transitional journey she takes deep outside their privileged environs to meet with her grandchildren. It's only at the end of these extended trips as she enters the poorer community that a true spark of life visually emerges from her. All this financial pressure comes to a head in the final act of the film. With the husband's his health declining he breaks some unexpected and painful financial news. Leaving Elena with limited choices – all grim in nature.

In the interest of fairness I should point out that Imaginary Embracey reviewed this film for its run at SIFF, giving it a coveted "Don't Miss" rating. His thoughts are pretty to the point, "Gripping, stylish, gorgeously crafted Russian tale of a coveted bequest, pitiless class conflict, and the misdeeds of a tenuous marriage. He's rich, in poor health, and drawing up a will; her lazy son's trashy family needs dough. But noted filmmaker Andrei Zvyaginstev (The Return) doesn't allow their story to follow any prescribed path. Tension arrives in slight movements and subtle unravelings; it's a beautifully slow burn, and patience is rewarded manifold. Feast your eyes."

I can see where he's coming from — and if your tastes skew more in his direction overall you should probably take the opportunity to see Elena before it leaves town. If you'd like to read on, I'll complete my contrarian thoughts.

The visual crafting excellence of the film is objectively true. And Embracey's overall description of the plot is dead on as well. The significant variance comes from the tension – which for me never really crackled the way I wanted it to given the mood of the proceedings. Sure there's the carefully doled out Philip Glass soundtrack and Hitchcockian airs. Maybe the tension never quite arose because I found the path less than wildly unexpected. Plus whichever path it chose led to someone's deserving fate. To the extent that most of the characters have a shade of asshole to them. With the arguable exception of Elena who is sort of wronged by almost everyone else onscreen. If you're going to enjoy deconstructing the film's allegory, it's have and have-nots and what they do for their place in society undercurrents then you probably will greatly dig this film. My perspective focused more on the limited payoff and (admittedly high quality) style over depth of story. It's basically a great film that didn't do much for me. I get that's perhaps not very helpful – except if it is. Personally, I've been hearing a lot of great things about The Beasts of the Southern Wild which also opens Friday. Just saying.