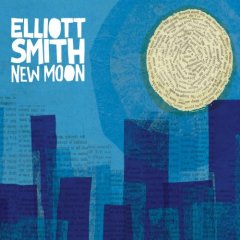 This collection of Elliott Smith Rarities and B-sides has been brought to us with the care of the folks down in Olympia at Kill Rock Stars. It’s nice to see all these favorites gathered together on CD for the first time, and perhaps unexpectedly, the 2-disc collection will serve nicely as an introduction to Elliott Smith for naïve listeners embarking through his catalog for the first time. Collecting tracks from throughout his career, it’s almost a greatest hits compilation, just lacking in the most popular tracks.

On the other hand, for longtime fans, a couple tracks will be recognizable. “Angel in the Snow” saw release on the companion disc to Mike McGonigal’s inaugural issue of Yeti magazine, and “See You Later,” the only other previously-released track on the compilation, was issued on Air Check, a cassette from Jealous Butcher, in a run of only 300. (If you have a copy of that, count yourself lucky).

“Angel in the Snow” begins the collection, an eerily fitting articulation of Elliott’s tragically short time on earth: “Don’t you know that I love you?” he sings in that innocent and familiar tenor as he carves out another airy melody.“Sometimes I feel like only a cold still life / That fell down here to lay beside you.” Following “Angel in the Snow” come two tracks as good as anything he ever did: “Talking to Mary,” which perhaps wasn’t included for simply the reason that it sounds so much like everything off Roman Candle, and “High Times,” a crescendoing rock song (well, Elliott Smith’s type of rock song), that this reviewer certainly would most likely still consider one of the better tracks in his ouvre if it’d been available years ago. A more traditional melody and chord progression than the sound for which he’s known, “High Times” plays as a building, cathartic release against authority: “I’m so sick and tired of trying to change your mind / when it’s so easy to disconnect mine / high times!”

Then there are the surprises, ones that don’t fit anywhere in the Elliott Smith catalogue. True, many seem to be obvious cutting-room-floor tracks from certain records. Not to say they lack for quality, but simply, like “Talking to Mary,” were unnecessary to fleshing out a complete album—likewise, “Looking Over My Shoulder” seems right out of XO, and “Going Nowhere” right at the end of Figure 8. But some, like “New Monkey,” fall completely outside the discography. As unlikely as it may seem without hearing it, “New Monkey” could be a cover of an unreleased track from Death Cab for Cutie’s Plans sessions. “All Cleaned Out” could be a cover as well, of just about any indie band out there today or yesterday, and fits somewhere between records for Elliott.

One would like to list out highlights of the record at the end of a review. But what’s offered on this collection defies that standardization. It is the highlight. These songs are the lost truly of a truly great songwriter’s career, and whether they were ever intended to be heard or not, whether they would have been revamped into some future project and sounded entirely different, we’ll never know. Whatever would have happened or could have happened, what did happen is that these were the songs Elliott kept for himself.

The unreleased tracks that make up the 22 other tracks cause one to marvel. Why? Why were these never released? But that’s the goal of any rarities compilation. And in this case, to criticize songs we don’t know were intended for release would be wrong. When an artists sends out a record for review, they take a risk that the reviewer will or will not enjoy it, see merit in it. To not release something, we might infer, means the artist isn’t ready to take that risk. Not to criticize his family, friends, and label for releasing the material — it’s a tribute to his art how much fans miss him — but to criticize the individual songs, to analyze cohesion and flow of the artwork itself, to label some of these tracks as better than others—that should be a right reserved to the individual listener during the personal experience of listening to Elliott, of, for all intents and purposes, entering this intimate portrait of his life outside the music that defined his career.

But let’s not get too carried away. I’m a fan myself. A huge fan. I wrote a long diatribe about My Elliott Smith in college. I for one think this compliation is perfect.