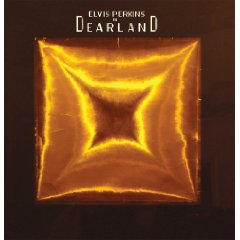 On Elvis Perkins’ first album, Ash Wednesday, he sounded like a mixture of Bob Dylan and Jeff Mangum of Neutral Milk Hotel. I even initially mistook the song “While You Were Sleeping” for a lost Neutral Milk Hotel song, due to Perkins’ uncanny resemblance to Mangum’s nasally voice and the use of an excellent horn section. On this new album, Elvis Perkins In Dearland, he mostly just sounds like himself. Sure, the comparisons to Dylan, Leonard Cohen and Mangum are still valid, but you wouldn’t mistake a song on Dearland for an Aero plane Over The Sea B-side. Sophomore slump is a problem that affects lots of musicians, but Perkins seems to have artfully dodged that condition. Instead, he’s managed to pull together an album that takes the best elements of his previous record and incorporates some new stuff as well.

This album shows that Perkins is not afraid to try new things. A perfect example of this is the song “I’ll be Arriving” which rattles and stomps like a chain gang’s march through the desert. Actually, the track kind of sounds a bit like Beirut from their first album. Whirling organs and jangling percussion build up the song and a muffled trumpet solo tops it off, with Perkins’ electrified guitars providing the backbone of the piece. It’s not a funeral march, but it’s also not a celebration, and whoever it is that’s arriving is bringing with them incredible woe, the kind that causes towns to lock their doors tight and batten down the hatches. Something like this would never have found a home on Ash Wednesday.

Perkins music is laden with a kind of melancholy that makes you feel a little sorrowful, like everything isn’t quite right. His compositions are like that, sort of tugging lightly at your heartstrings, not enough to make you cry, but enough to make you feel a little chilly. That, and the music is gorgeous. “Chains, Chains, Chains” is an acoustic ballad that features not only a moving string section, but also a brass contingent, each one trading places before they come together at the end beautifully. Ironically, the most celebratory track on the album is the rousing “Doomsday” which is one of those “so what if the end of the world is imminent, we’re going to celebrate anyways!” kind of a song. Like a twisted version of Perkins’ own “Mayday!” “Doomsday” is a brass and acoustic guitar party, with a foot stomping rhythm section. It’s a sadhappy kind of song, but it makes me want to get up on a table and dance. Not bad for a song called “Doomsday.”

Perkins has a gift with opening tracks though, and “Shampoo,” with its collage of acoustic guitars, keyboards and harmonicas, is a contender for best track on the album. Another thing Perkins is gifted with is lyrics. They’re pure poetry, and the aforementioned Dylan, Mangum and Cohen would all be proud to have Perkins joining their ranks. It’s wonderful that this album found its way to me in spring, because this is just the time it’ll be perfect for, that transition to light and warmth with occasional cool breezes. Perkins hasn’t dodged sophomore slump, he’s leaped over it in a single bound. WHEEEEEEEEEE!