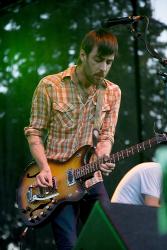 Sunday night marked my first time seeing Canadian indie rock band Wolf Parade live in concert. I’m not totally familiar with the band’s music, but I’ve always harbored a strange fascination with the band’s name. I mean, really… a wolf parade… a parade of wolves? That just sounds like so much fun! I’m more familiar with guitarist/vocalist Dan Boeckner’s other project, Handsome Furs.

The Canadian five-piece put on a captivating and flowing long set. The vocals were handsome, the energy was definitely pumping, and the instrumentals were majestic.

Since Wolf Parade was the final listed band for SP20, at the end of their set it was announced that “Sub Pop Band” — drum roll please — Wolf Parade would be ending the night with an encore. The boys ended the night with a beautiful rendition of “I’ll Believe In Anything.” Though not the superstar ending some expected, it was a lovely way to end a beautiful weekend, as the many that waited for a potential surprise guest filtered out of Redmond’s Marymoor Park could attest.

Though I must question Sub Pop’s decision to have Wolf Parade headline Sunday, there is no doubt in my mind that the weekend was one of the best experiences I’ve ever had at a music festival. I loved Marymoor and was glad that I got to see so many bands that by no means were even really even together before the festival. “You see this here?” an acquaintance of mine asked as he gestured towards the main stage late Sunday afternoon. “This is never going to happen again.”

I kept his words in mind as I followed through the day, trying to take in as much as possible. Sub Pop is a part of Seattle history, and I am so glad that I got to be a part of the celebration. Happy birthday, Sub Pop!