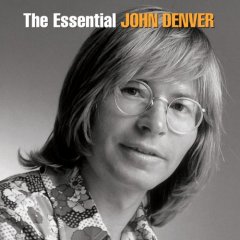 Here are my two essential John Denver facts: I know he died in a plane crash, and I know that I like that song "Rocky Mountain High," mostly because I think it was in a beer commercial that I remember from when I was a kid (maybe it wasn't, but it's my memory so I can think whatever I want). I also know that occasionally late at night on cable I've seen commercials for various John Denver CD collections, or folk collections that feature John Denver. Every time one of these commercials comes on I think, "that John Denver had some pretty catchy songs." I've never actually ordered said CD collections, but I'd be lying if I said I didn't think about it, before my overall disgust in ordering anything off of a TV commercial kicks in and I put down the phone. On these same commercials after I get done thinking that John Denver had some good tunes, I always think, "I can't believe he actually succeeded in the music industry looking like that." This thought comes to the forefront of my mind when looking at the cover for the recently released The Essential John Denver.

As with most of the Essential series, all of the essential John Denver tracks are here, hence the "Essential" in the title. Sony Music touts their Essential series as "indispensable retrospectives" that are "comprehensive, career spanning collections." What it comes down to is all the hits are here, and they all sound as if they came right off the master tapes. I've purchased a handful of titles from the Essential series over the years and always find them to be great introductions to an artist that provide good quality sound at a reasonable price. (Although I must say they use "essential" pretty loosely, as artists like Fishbone and Cheap Trick have Essential titles. I don't think of hardly anything Cheap Trick did as essential, "I Want You to Want Me" being the obvious exception).

It's a front-loaded collection with seven of Denver's nine top twenty hits landing on disc one. It opens with "Leaving on a Jet Plane." Yes, that's a John Denver tune, although it's been covered by all sorts of people, including Slightly Stoopid, which is hysterical. Disc one also contains the aforementioned "Rocky Mountain High" and "Thank God I'm a Country Boy," which should be on everybody's party play list, along with "Take Me Home, Country Roads." Disc two starts off with "Calypso," one of Denver's four chart-topping US singles, "Thank God I'm a Country Boy," "Annie's Song," and "Sunshine on My Shoulders" are the others &#151; I know you were silently demanding to know the other three &#151; and all are included on Essential. The second disc also contains "Wild Montana Skies," a duet with Emmylou Harris. So if you're the type of person who'd be embarrassed about owning The Essential John Denver, you could always point to song 15 on disc two and say "I just bought it for the Emmylou Harris song," as Emmylou has made it into the hipster cool country class.

Here's the thing, though. If you've ever enjoyed any sad emo song, if you like alt-country, if you're into the cool new singer songwriters making their way around the indie world, odds are you'd dig John Denver. Denver, along with his contemporaries such as Cat Stevens, Jim Croce, and others, ruled the 1970's. They sold out arenas, had network TV specials and chart topping records, Denver even appeared on "The Muppet Show." That kind of exposure leads to influence. Just as I know all the words to "Rocky Mountain High" without even trying, odds are that a young Jose Gonzalez probably heard "Annie's Song" while growing up in Sweden. Look Jose up on Wikipedia and it states "his trademark sound is solo classical guitar with soft melody," which sounds kind of like John Denver, doesn't it? (Note: I didn't actually talk to Jose Gonzalez about this. He might hate John Denver.)

All in all, this two-disc collection is worth owning. Maybe you don't run out and buy it today, but if it ever shows up on sale somewhere, or if you ever see it used, it's definitely worth having. On those rainy northwest evenings with that special someone there's nothing better than a warm fire, a glass of wine, and some John Denver.