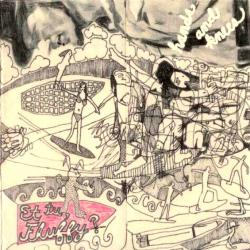 Hands and Knees are clearly a playful indie rock outfit, and with their upcoming release, Et Tu, Fluffy?, they put their playfulness on full display. Combining a varying collection of soft, catchy melodies with an abundance of beautiful thrashy guitar, Et Tu, Fluffy? is a fun and friendly record that is never afraid to bite.

Because this was my first exposure to the Boston-based quartet, I started with their album art — which, as this was a pre-release version, was not the final cover art but instead a hand-drawn sleeve — in an effort to get a sense of what kind of band I’d be listening to. The brilliant collage of assorted geometric shapes, bicycles, stick-figure surfers, airplanes, and what appears to be fast-food soft drink containers immediately reminded me of those beautiful sketches you draw in the margins of a boring economics class. Like a classroom doodle of chaotic proportions, the DIY art accompanying the CD has simple artistic integrity. It is rambunctious, yet serene — full of life and sparse at the same time. These themes carry directly over into the first song of the album and continue through record’s duration.

It’s almost impossible to pick which of Et Tu, Fluffy?’s songs is the catchiest, so I won’t go about attempting such a feat. The album does, however, begin with three sweetly composed tunes — each displaying Joe O’Brien’s warm vocals with delicate musical accompaniment punctuated by inventive guitar solos and periods of heavy drum and bass. The record picks up the pace with "Blue Day Moon," which is also the first time I started noticing bassist Carina Kelly’s backup vocals. O’Brien and Kelly’s effective vocal coupling bring to mind the Deal/Francis charm that made so many Pixies songs come to life.

While the middle of the album brings about an increase in tempo, there are still plenty of soothing moments sprinkled amongst the vibrant, writhing guitar. Kelly’s lead vocal performance on "Anywhere But Here" is a perfect example of the playful combative forces at work throughout the album. Her small voice floats amongst the waves of guitar that flood the song with a commanding force. O’Brien’s vocal treatment in "Do You Really Need A Drummer" works on a similar level. As the intensity of the music builds, O’Brien keeps an eased composure, creating a fascinating balance between the rising music and his collected singing. 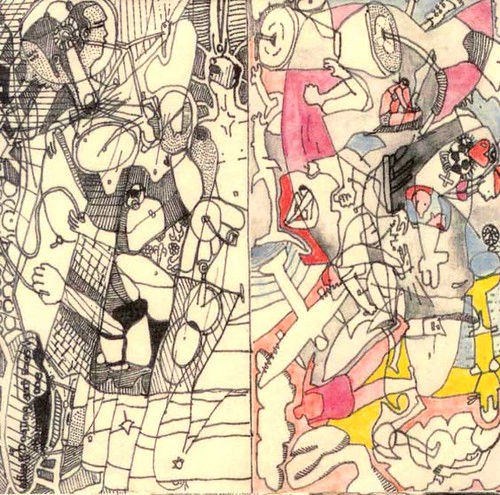 The latter portion of the album may be its weakest section. In "We Are The Man Who Cannot Fly," O’Brien seems to abandon the vocal poise he perfected earlier in the album in favor of numerous echoing yelps. "Shove It Up Your Heart," the shortest track on the album clocking in at just over ninety seconds, is a turbulent duet that feels somewhat out of place. While neither of these songs are bad, they never seem to capture the mixture of push and pull energy the rest of the album embodies.

The final tune, "What Ever Happened to that Beautiful City," is another track that may feel out of place on the album, but works very well as a closer. It is by far the slowest (and longest) song of the set and it shows yet another side of the band. The soft guitar and airy vocals produce a dreamy composition achieved nowhere else on the ten previous tracks. While it did sound like an awkward departure at first, it quickly became one of my favorite songs on the album — once again establishing how well Hands and Knees are capable of merging beautiful harmonies with potently edgy guitar rock.