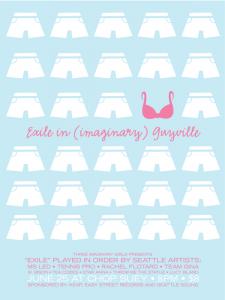 June 3, 2008, Seattle, WA: It's true that we stole your lighter. And it's also true that we lost the map. That's why Three Imaginary Girls will proudly present the songs of Liz Phair's triumphant debut record "Exile in Guyville" as interpreted by some of the best up-and- coming bands in the Northwest. The event is called "Exile in {Imaginary} Girlville" and is co- sponsored by Easy Street Records, Seattle Sound Magazine, and 90.3 KEXP.

Exile in {Imaginary} Girlville takes place on Wednesday night June 25, 2008 at Chop Suey and features Throw Me the Statue, Team Gina, Star Anna, Tennis Pro, Lucy Bland, M. Bison, Tea Cozies, as well as special performances by Rachel Flotard of Visqueen and Lesli Wood of Ms. Led. The bands will perform the songs on the record in order, from "6'1"" to "Strange Loop" and everything in-between.

The event marks the 15th anniversary of the release of "Exile in Guyville" and ATO Records' re-release of the album with additional demo tracks, as well as finally releasing a vinyl version of the record. Which is certainly cause for celebration.

Three Imaginary Girls anticipates another year of incredible live music and record reviews, as well as some new exciting changes. The website has some new looks and colors coming very soon as well as other big fun updates planned for the coming year.

But for now, the excitement is focused on June 25.

"Sure, Liz Phair just announced that she'll be performing 'Exile in Guyville' on the same name, in New York" said Liz Riley, co-founder of Three Imaginary Girls. "But I'd rather hear Rachel Flotard sing "Fuck and Run" than Liz Phair herself.

Do you wonder just how wild that would be? Join Three Imaginary Girls on June 25 to find out.