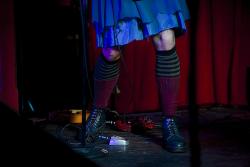 Celebrating six years of TIG at Exile in {Imaginary} Girlville

Last night Three Imaginary Girls celebrated two momentous occasions — our sixth birthday, and the re-release of one of our favorite albums of all times, Liz Phair's seminal debut Exile in Guyville — with the best tribute to the fine record we could think of: nine of our favorite Northwest bands, covering the record from start to finish. We're still reeling from the sheer giddiness of the night. Chop Suey was packed with over 300 amazing people, reveling in the joy of finally getting to hear the album performed live by such amazing musicians.

The bands were stellar. Srsly. I had extremely high expectatation for the night, and they were all exceeded.

Thanks so much to all the amazing bands who played; thanks a zillion to Easy Street Records, KEXP, Seattle Sound Magazine for co-sponsoring the night and especially to David Schmader of the Stranger for co-emceeing it; and most of all, thanks to all of YOU, our readers for an insanely wonderful six years of Three Imaginary Girls.

Without further ado, here's the setlist as well as some fabu-photos from the night. We expect loads more pictures coming in the next few days; in fact, if you have some yourself, please post them to our TIG Sparkly Indie Pop Flickr group.

Who knew "Help Me Mary" needed a glockenspiel? Lucy Bland, that's who. Photo by Laura Musselman.

Star Anna bowled us over with her throaty, sparse interpretations of her songs. Photo by Laura Musselman.

M. Bison: They come when called. Photo by Laura Musselman.

Rachel Flotard of Visqueen was Mesmerrizing. Photo by Laura Musselman.

Letters and sodas and Visqueen. Photo by Laura Musselman.

Lesli Wood gets away with what the girls call murder. Photo by Laura Musselman.

Lesli is backed up by Cristina Bautista and the Team Ginas. Photo by Laura Musselman.

Throw Me the Statue like to pretend they're in a Galaxie 500 video. Photo by Jeanine Anderson.

Throw Me the Statue. Photo by Jeanine Anderson.