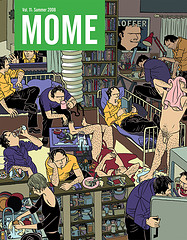 I have reviewed MOME for Three Imaginary Girls before, and usually a music website is perfectly satisfied with one plug for a comics title. But MOME is the flagship anthology of worldwide graphic arts juggernaut Fantagraphics. What kind of comics company is Fanta, you probably already know? The kind that shares space with Georgetown Records in ripping roiling (da dum) Georgetown and the two fannish crowds to both blend together seamlessly. It's the funny pages factory (I'm being a dolt on purpose by the way, we indie rock comics fans have ass-hats stuffed with irony, imagine that) where Mark Arm would do manual labor around if Sub Pop got sleepy or had no openings when he came back from tour with the 'honey (do Mudhoney call themselves that? Does anyone? I rather like it). And rumor has that he does.

Volume 11, Summer 2008 of MOME is a big improvement over some recent issues, wherein some of their regulars petered out in the inspiration department. The main reason I am raving about it now (if Books had ratings on TIG this would be an "8") is the first-time American publication of German cartoonist Killoffer (single cool name, like Stephen M. and Mister Rogers Nelson) whose very cool cover and wickedly disturbing lead story, "Einmal Ist Keinmal" (something like Teutonic for "Once Is Never," sort of Cure-ish don't you think?) is a real find and worth the paltry fifteen bucks for this edition alone. You ever read Heavy Metal and wonder what it would be like with some subtlety? Or seen a savage paranoid film noir and wonder what it would look like with great expressive pseudo-Art Deco-style uses of B&W drawings. Yes.

The sweetness and hotness in this thick issue continues with Nate Neal's "The 5 Cosmic Do Dats" which uses archetypal underground comics imagery, later "Eightball" style chunks of small stories blending into one visionary novella, and Dada slapstick humor to drive a very important spiritual point home (which has nothing to do with any sort of spiritual laws you can find in a street-corner comics pamphlet). A stunning first story from Neal, whose art may not be that refined but it certainly doesn't lack for fun or creativity.

Also present is Al Columbia's grotesque ode to either murder or really ambitious suicide "5"45 AM" (which due to its way of telling a story is one of my favorite graphic fictions of the year, as simple as the story may be), a very cool and inventive series of single panel action comic called "The 10,000 Rescues" by Eleanor Davis which would make for some astonishing animation, the continuation of Kurt Wolfgang's boring-story but really sweetly drawn end-of-the-world fantasy "Nothing Eve," and the incredibly well-written but not-very-inspiringly illustrated "Million Year Boom" by Tom Kaczynski.

There's a lot of other gems too, pure pleasure and mixed, but I want to clarify something as I wrap this up: Now comics are being made that shouldn't just be tried out as comics, but as to the reader's own regular literary preferences. In other words, MOME is graphic fiction and illustration for those who are already into McSweeney's and such. This may require a new viewpoint on the casual reader's part, to realize that dancing about architecture — that is, a dialogue between aesthetics in form — is a valid thing that has already been happening a while, and all you have to do is know where to begin. If you like oblique modern and post-modern fiction, and really enjoy avant-cartoon illustration, MOME is a perfect sampler. And it has enough great stuff to keep geezers like me buying it as well.