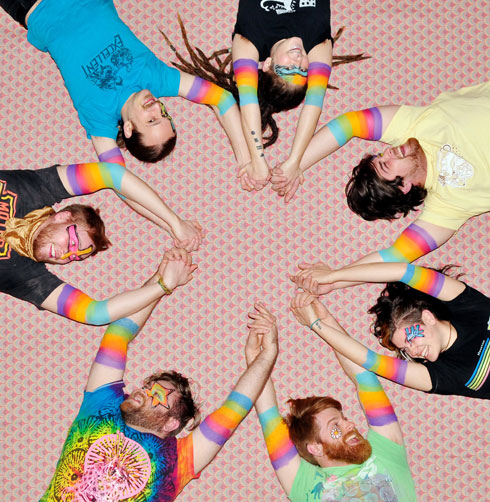 Favorite band alert: Dangerous Ponies {at the Comet this Wens 4/27}

In this era of sponsored hype nonsense and corporate grassroots initiatives, it’s time to get back to the core of why we get dirty fingernails flipping through record bins and sacrifice respectable sleep patterns and clean laundry to recharge the batteries of our hand-stamped hearts.

Enter the Dangerous Ponies from Philadelphia.  A seven-piece who describe themselves as a “queer and allied band, slathered in gold and rainbows.” But, they are more than that.  Dangerous Ponies are a reminder that great things happen when calculated postures are replaced with giddy enthusiasm.

Combining the DIY-or-Die mantra of the Pharmacy and the elegant cleverness of the Starlight Mints, the songs on the Dangerous Ponies self-released, debut full-length album, would be equally comfortable at a beach dance party, house party sing along, or played from the decks of a Linda’s happy hour DJ set between Modest Mouse and Heavenly.

The opening track “We” is a fitting introduction to the band as an indie-dance party carousel ride – weaving between splashes of Tilly and the Wall and Queenish 60’s glamrock. From there they dive deep into sweeping theatric mid-song breakdowns and churning indie-rock Built to Spill guitar rifts that lay the groundwork for comparisons to Los Campesinos!, Quasi and Stereolab. (listen to the album for free on bandcamp).

The band bravely and seamlessly transitions from ramshackle to demure to bombastic, thanks to what some could write-off as happy accidents, but is actually the product of a well-oiled machine of buddies crafting songs that they want to play over and over for a room packed with friends.  Best of all is that Dangerous Ponies will be in Seattle this Wednesday, April 27 at the Comet on a marvelous bill with Stickers, Gliggerbang, and Noddy.

Ok, *actually* the best part is that their shows have been known to include glitter and audience costumes (as evidenced in this video):