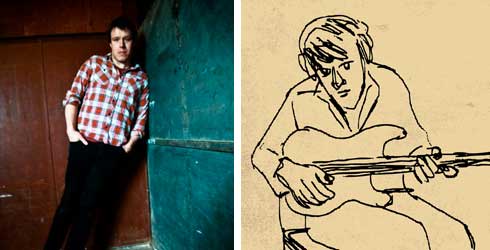 Earlier this week I talked about all the City Arts Fest line-up amazingness taking over the city of Seattle from October 20-22, 2011. One band I'm particularly pleased to see in the line up is Joseph Giant, the moniker of Joe Syverson, at the Rendezvous on October 21 with Son of Warren Oats, Smokey Brights, and Bryan John Appleby.

You might recognize Joe from his time spent with Throw Me The Statue, Pearly Gate Music, and Final Spins. Obviously with friends like those, he's a talented guy. But over the course of listening to his self-titled debut album, Joseph Giant proves himself to be more than a sum of his Neil Young / Wilco influences.

He breaks free of the usual boundaries of PacFolk (Pacific Northwest breed folk that usually, but not always, results in Crosby Still Nash dependencies, shallow melancholy, and beards), to craft catchy, grounded songs that find comfort in Jackson Browne but challenge like Abbey Road b-sides.

But, for those of us who can't wait until October, JG will share a bill with Gold Leaves (Grant Olsen of Arthur and Yu) and Kevin Murphy (Moondoggies) September 1st at The Crocodile.  The show will celebrate Gold Leaves' album release on the Hardly Art.

You can get the entire JG album from Bandcamp for only $5. My favorite song from it is "Up & Down & Out"