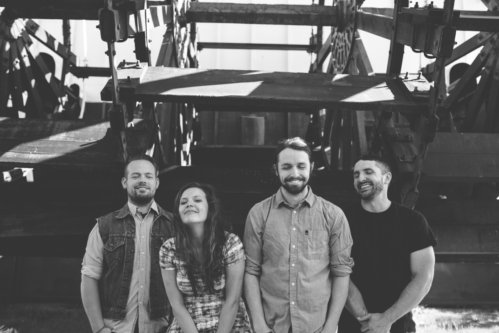 We got pretty excited about BellaMaine’s debut EP, Anxious Mind, last year. Five songs of their sweet-tart pop was a good start, but this week’s release of their self-titled album, Bellamaine, doesn’t come a moment too soon.

Three songs from the EP have carried over to the full-length, and my favorite song from their live shows, the plaintive “Don’t be Far Away,” is on the new album, too. The single “Listen to Someone Else,” has a little more groove than the old songs, and has been getting a lot of airplay on KEXP. Their whole ethos is captured in the new track “Subtle Distraction,” a perfect antidote when you find yourself starting sweat the small stuff. Julianne Thompson has a lighter voice than Natalie Merchant, but she uses similar phrasing that evokes early 10,000 Maniacs. There’s a Smashing Pumpkins vibe on “20 to 5” that adds a little heft to their otherwise marzipan sound. You can listen to the entire album on their website, and if you like it (I think you will), you can directly support the Anacortes-based independent band by buying it right there.

The xx and 80’s pop influences are still present. The new songs are as deceptively light as the ones we loved last summer, the male/female vocals providing the same sweet/savory counterbalance and still anchored by a solid rhythm section. In other words, we’re still loving BellaMaine.

BellaMaine are playing their album release show this Saturday at the Columbia City Theater.

{See BellaMaine at Columbia City Theater on October 25 with The Weather and Silver Torches. Tickets are $8 adv., $10 at the door. Doors at 8 p.m. 21+ You can also buy the album on Amazon.}