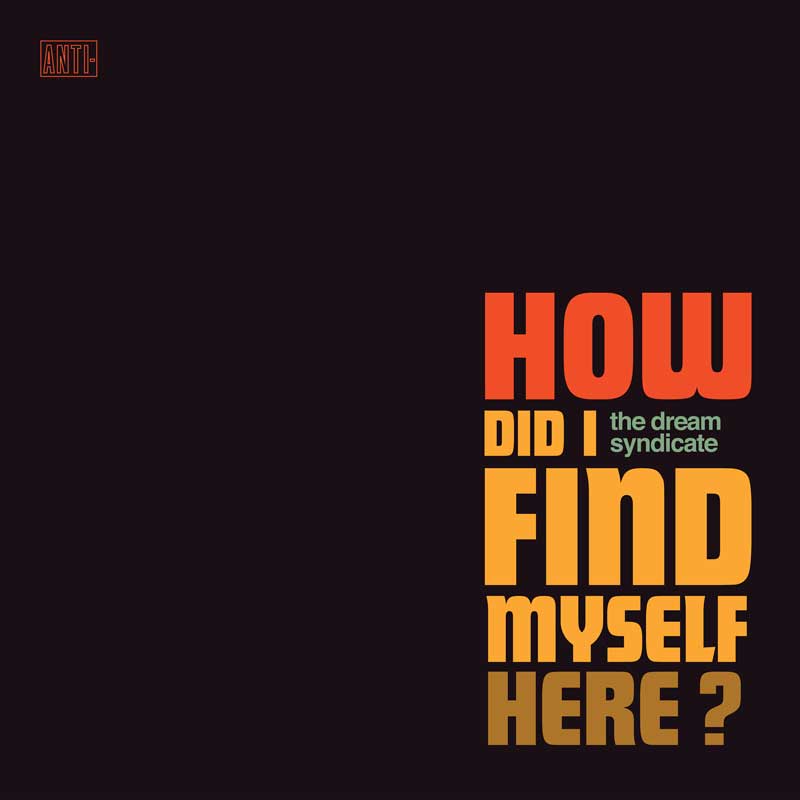 How Did I Find Myself Here? by The Dream Syndicate

Although it is amazing to finally have a new album by The Dream Syndicate, this particular reformation seemed quite unlikely. It’s not that the likelihood was impossible by any means, but the original line-up getting back together would have been a surprise. The first line-up that created the absolute masterpiece, The Days of Wine and Roses (1982), consisted of singer and guitarist, Steve Wynn, lead-guitarist Karl Precoda, bassist Kendra Smith and drummer Dennis Duck. This iteration of the band only recorded their debut EP and album, The Days of Wine and Roses, which ranks as one of the very best albums of the era. Shortly thereafter, Smith left the band, followed a few years later by Precoda, and it was never quite the same again. The original sense of urgency and energy was never restored to the extent that it was captured on their first album and 12” single. Nonetheless, The Dream Syndicate did still release a few more great records before eventually disbanding: 1984’s The Medicine Show and 1988’s criminally underrated Ghost Stories. After they decided to call it a day, Steve Wynn ventured on what became an extremely prolific solo career.

A few years ago, Wynn finally decided to reform The Dream Syndicate. In doing so, he reconnected with Dennis Duck and the group’s third bass player, Mark Walton (1984 – 1988). To solidify the lineup, he also added guitarist Jason Victor, who has been playing with Steve Wynn and the Miracle 3 since 2002. After the four-piece was assembled, the band toured in 2014 and performed at Seattle’s Bumbershoot festival that year. Although it took a few more years to record a new album, they have recently released, How Did I Find Myself Here? this month, their first studio record in 29 years. The CD and LP are now available on the prestigious Anti Records, a label who has released records by other veteran artists such as Tom Waits, Marianne Faithfull and Nick Cave and the Bad Seeds.

How Did I Find Myself Here? is strong from start to finish. The record features eight songs that veer closer to Wynn’s strongest solo material than The Dream Syndicate, but this isn’t a bad thing. After all, it has been almost three decades since the group split up. It would be difficult to imagine a new album sounding particularly close in sound to one of the first four. Nonetheless, this group is a treat to listen to. Victor’s guitar playing is noisy and fierce at times, which suits the record well. This alone gets them closer to Wynn’s original vision. Contrarily, Paul Cutler, lead guitarist for The Dream Syndicate on their last two records, overplayed horribly and ruined some tracks that would have been otherwise fantastic. He was the only weak link on Out of the Grey (1986) and Ghost Stories.

On the new record, Wynn’s vocals are strong. He certainly sounds re-energized. The rhythm section of Duck and Walton is rock solid, which isn’t too surprising given that they played together for four years with the band in the 1980s. They seamlessly lock into a groove and keep the backbone tight throughout the entire album. “Glide” pulsates with punchy bass and drums while the title track, “How Did I Find Myself Here?” is an eleven minute krautrock classic. It also features part-time member and frequent Wynn collaborator, Chris Cacavas, on Doors-esque keyboards.

How Did I Find Myself Here? has some wonderfully abrasive rock moments, too. “Out of My Head” rages along with incendiary minimalist lead-guitar from Victor. Wynn’s rhythm guitar chugs and churns the song forward along with the bashing bass and drums. “80 West” explodes with almost punk-like energy as Wynn recalls a surreal ride along the interstate from somewhere in the northeast. “The Circle” is another brilliant urgent rock song that sounds a bit like it could have fit on Ghost Stories.

The album closes with the droning Kendra’s Dream, which is another unexpected boon. The lead vocalist on this track is none other than original bassist, Kendra Smith. Her vocals sound as if they have been risen out of a musty cellar, much like a modern day Nico. It provides the perfect finale to the long overdue comeback Dream Syndicate record. Hopefully, there is more to come. In the meantime, the band is playing The Tractor Tavern on Saturday, 30th September. This show is highly recommended.