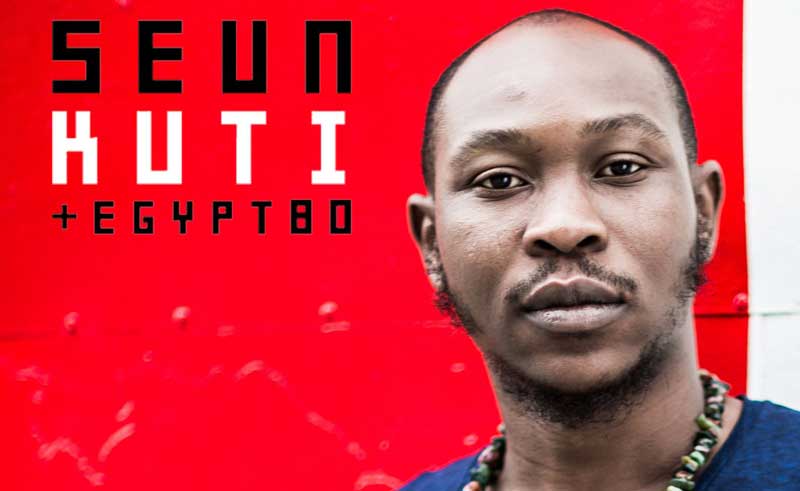 Recommended Show: Seun Kuti & The Egypt 80 at the Neptune Theatre

Seun Kuti & The Egypt 80 will be at the Neptune Theatre on October 3, 2017 (more information and tickets).

The lowest of low ends, the longest of grooves, and a smoldering mix of frontward horns and laconic, slinking guitar riffs: This is Seun Kuti and Egypt 80. And for Seun, it must be weighty being the scion of a true, shadow-longer-than-reality legend. At 33 years old, he fronts a band that his father, Fela Kuti, crafted in Nigeria to blast out the agit-pop Afrobeat genre in the 1960s and ‘70s. While it’s Seun’s show at the Neptune, you can’t explain him or the band or Afrobeat without considering Fela.

Stage-setting: When Fela was sculpting Afrobeat, the Black Power ethos was full-tilt in the US, and the Summers of Love were fading fast. Agit was rock. The Stooges were rock. The MC5 was rock. So, a new music genre in Nigeria? No big deal, considering all else. But Fela went way farther, declaring his band’s enclave a separate republic and prodding the Nigerian government continuously, in song and often by name.

The government kicked back – hard. In one raid of the Kalakuta Republic, soldiers beat Fela viciously and threw his mother from a window, killing her. So yes, Afrobeat in Fela’s hands was more than a genre.

He did time under the torturer’s hammer and in jail cells. He fought back. Fela was relentless and unapologetic (example: He married 27 women in one ceremony, paring back his count to a mere dozen some years later). He played and fought. Then he faded.

With Fela’s 1997 death at 58 years old, Seun stepped into the legend’s shadow, at 14 years old, and opted for Afrobeat over soccer. He took over as the Egypt 80 singer, keeping more than three quarters of Fela’s band —  themselves beaten and arrested and hassled endlessly by a rotating cast of Nigerian government characters. On they played. To be sure, it wasn’t just Seun and Egypt 80: US-based Afrobeat ensemble, Antibalas, kicked up and made a fine racket. And Fela’s most famous collaborator, drummer Tony Allen (Brian Eno described him as “perhaps the greatest drummer who has ever lived”), spun off with Damon Albarn, Paul Simonon, and Simon Tong in The Good, the Bad and the Queen. Horns stayed up front. Low-end rhythms chugged on. Resistance tugged the band forward.

Now Seun brings the riffs, the horn propulsions, and the loose-limbed polyrhythmic drum-up to the Neptune. Try this: Spin “Struggle Sounds” and when the call-and-response backing vocals start to jostle you, take aim at the baritone saxophone and Seun, nearly chanting, “Struggle music / Struggle sounds / Struggle people / Struggle now.” Try to stand still. Try not to let the low, low end and the swirly rhythms, the chiming guitar, and the woven punch sway you or at least hit your solar plexus. Then head to the Neptune; take it in full-force, in-person.