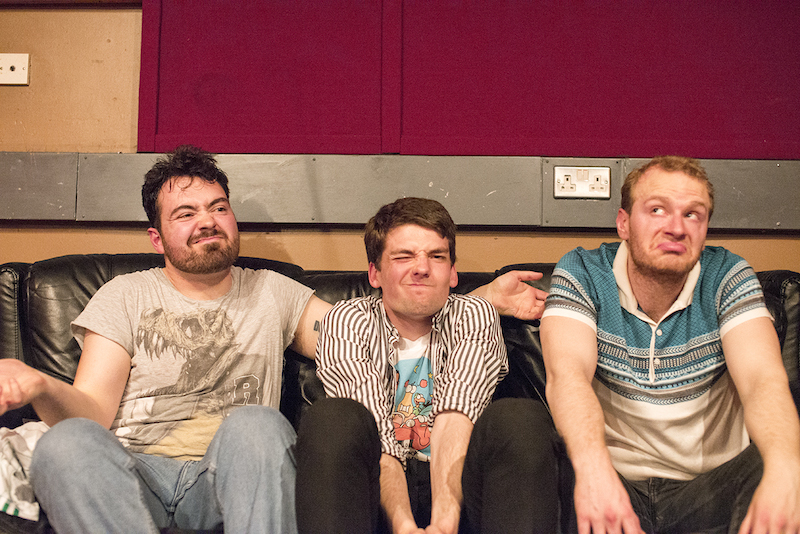 We are excited to share an exclusive stream of the new album by Shrug Life. The Dublin trio’s slightly self-titled debut full-length album, ¯\_(ツ)_/¯ {which takes keystrokes to a whole new level}, will be released on Friday, September 29, 2017 on Seattle’s very own indie-rific label – Jigsaw Records – but you can here it now, on repeat here at TIG.

The collection of songs share a tale of angst, but hide it beneath a cloak of wry humor and rousing guitar lines that build up and crash with a wink and smirk. My favorite track is “Free Bird II” – which makes sense since even that band describes that song as a “bag of riffs” and a “full bone-headed bombast throughout” – that’s my favorite indie-pop sub-genre!

Here the full stream of the album and read along to the band’s track-by-track synopsis:

We had this as a joke title for about a year.  As in, what do Shrug Life sing about? – What does any twenty-something white man with a guitar sing about?  I’m happy with the amount of minor and major irritations I managed to shoehorn into that lyric.  Also, fun fact – the main guitar riff was recorded on a Fender Mini Deluxe MD-20, which is a 1watt amp, roughly the size of your head – powerful.

A song in which I compare my call centre line manager to Benito Mussolini, naturally.  I used to work an abysmal job in the cancellation department of a satellite TV & broadband provider.  The work involved a lot of emotional manipulation and repeating the line “clearly you did not read the terms & conditions”.  A strange way to survive.  I was looking at my manager at the time as someone who had completely bought into the deception and chicanery that made up the job – wondering if I’d go the same way if I stayed much longer.  Fun times.

A pop song, sort of.  Took the rhythm from ELO’s Mr. Blue Sky, or more directly Forever 28 by Stephen Malkmus.  It details the rush of new romance and all the possibility that goes along with it.  Feeling yourself becoming an insufferable cheesemonger and being okay with it.

Keith plays a mean bass on this one.  I also got to go berserk with producer Fiachra McCarthy’s trademark mini-megaphone – wild stuff indeed.  The lyric laments the false promise of “we’re in this together” campaigning.  In Ireland the two main political parties are deeply entrenched in a tradition of backhanders and cronyism – operating with a conservative disregard for lower income workers, homelessness, the failing health system and women’s rights.  I could go on, but the song articulates it a bit better – “it’s the same divide, with a different name”.

In Ireland women do not have the right to legal abortion (this extends to cases of rape, and a fetus that will not survive outside of the womb).  As a result women are traveling (on average 10 per day) to clinics in Britain in order to obtain an abortion.  Rightfully so, The United Nations has labelled Ireland’s abortion laws “cruel, inhuman, and degrading”.  This song was inspired by reading various womens accounts of their journey to and from Britain.  I tried to illustrate the comic tragedy of getting a Ryanair flight with people on hen/stag dos, being sold scratch cards by flight attendants and asked if “you had a nice holiday?”.  Our friend Maire Carr kindly agreed to sing on the track with us.

Well every band is allowed to have one song with a girl’s name as the title.  It’s a curious thing when someone enters your character and becomes it core…however briefly.  The sonic wizardry of our producer Fiachra McCarthy is particularly evident on this one.  Keith goes full Peter Hook on the bass, Josh plays some marvellous skittering drums.  It’s also as good a mountaintop guitar solo as my shaky hands can muster.

Old cliches of the heart and absence.  I wrote this lyric the day after our first gig.  It seemed like the appropriate way to celebrate.  That morning I’d bought Elvis Costello’s ‘Almost Blue’ album (rich with country covers of longing and woe).  “I summon the strength to feel something now the train’s pulled out of the station – now the situation’s beyond me, I can lament the hesitation”.  I like the randomness of this song’s outro too- when we play it live it tends to confuse people.

Social media fatigue – the sense that everyone is curating a version of themselves, living life as a public relations campaign – becoming a little bit more narcissistic and distracted within their information silo.  It’s something we’re all complicit with, but you can feel a bit disconnected from taste, touch, smell when you commute on your phone, to a job on a computer, returning home to a TV.  Musically we tried to counterpoint a kind of Diamonds On The Soles Of Her Shoes verse, with a heftier, drawn-out chorus – as schizophrenic as the age we live in.

My brother lived abroad for the last six years.  Despite his distance he remained one of few people I could truly communicate with.  It’s an acknowledgement of the things you share with a sibling and the pacts that remain across time differences and lagging internet connections.  Musically it’s a bit mellower, which I like.  Definitely indebted to Land Lovers, who would’ve rehearsed next door to us at the time.

The long awaited sequel to the much loved original.  Full bone-headed bombast throughout.  It’s a more a bag of riffs than a song in my opinion, but we had our fun, and that’s all that matters.  The alternative titles for this were – ‘Homer Jumps The Gorge’ and ‘The Elminator Ramp From Gladiators’.

Because every legit, pro-shit rock album needs a Japanese Bonus Track.  Partly inspired by a BBC Four documentary (the last preserve of rock music of course), and watching Glastonbury 2015 headliners (Kanye West, The Who and Florence + The Machine).  Rock n’ roll is a very commodified notion at this point.  Dark Side Of The Moon deluxe reissue with marbles anyone? I also feel like people have debated rock n’ roll’s death since Elvis went into the army.  It’s redundant and ridiculous and I love it.