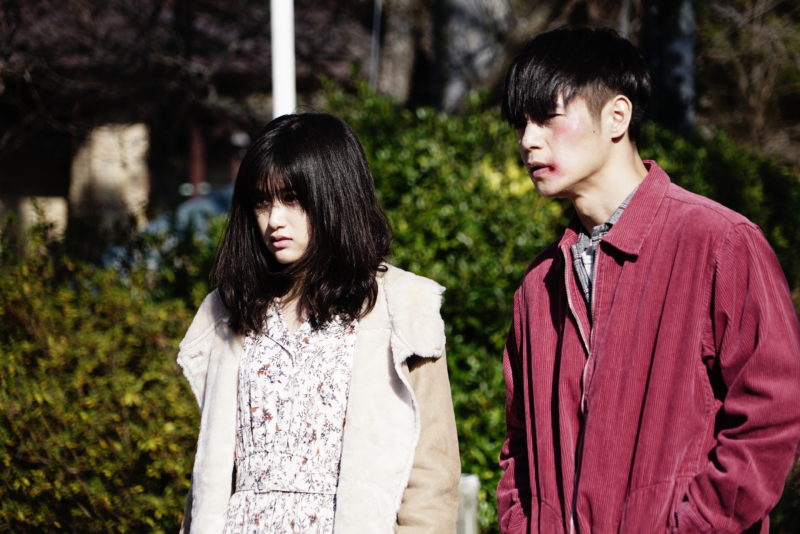 I am consistently blown away by how deftly Director Takashi Miike cranks out fantastic films. The prolific Japanese Director has helmed 103 movies, all infused with his signature gory (and many times shocking) violence, each one a goddamn delight to watch. His latest feature First Love, about an unlikely couple who meet in the midst of a gang war, is no exception.

An already burgeoning turf war between the Yakuza and the Triad gets kicked into gear by young Yakuza member Kase, who teams up with a corrupt cop to double-cross a drug dealer, Yasu. The plan involves using Yasu’s captive prostitute, Yuri (aka Monica), as a scapegoat, but everything goes hilariously wrong from the moment things are put into action.

Yuri was sold to Yasu and his girlfriend Julie by her own father as payment for his debts, and to cope, she’s become a drug addict who has frequent hallucinations of her mostly naked (maybe dead?) father coming after her. After bolting a crucial moment, she runs into Leo: a pro boxer who’s just been told he has a very short time to live, thanks to a large brain tumor.

Seeing Yuri pursued by a gang member and screaming for help, Leo punches him, knocking him flat on the ground. From that moment on, the two are a bonded pair who have to help each other get through a blood-soaked war — and hopefully, survive until the end.

Meanwhile, Kase decides to continue with the plan and shows up at the dealer’s house, where the most awkward fight ever ensues resulting in Yuri’s death. And this is where my favorite part of the movie starts — Julie, devastated at discovering her boyfriend’s dead body, immediately goes into full RAGE mode and begins a furious path of revenge:

Step 1: after luring a gang member who tries to grab her closer with seduction, she stomps the shit out of him while screaming, “Don’t get blood on my pants so I can’t wear them again!”

Step 2: even though the Yakuza says they will hunt down the killers and make them pay, she grabs the largest knife she can find and vows to murder them herself.

Step 3: after Kase reveals himself to be the killer, she grabs a goddamn crowbar and doggedly pursues him, even jumping on the hood of his car.

The second Kase sees Julie running towards him with the crowbar, he says, “Everything is fucked,” and it’s impossible to download to you just how true that statement is. The film barrels into its third act in a glory of gunfire, swords, and of course, some gnarly decapitations.