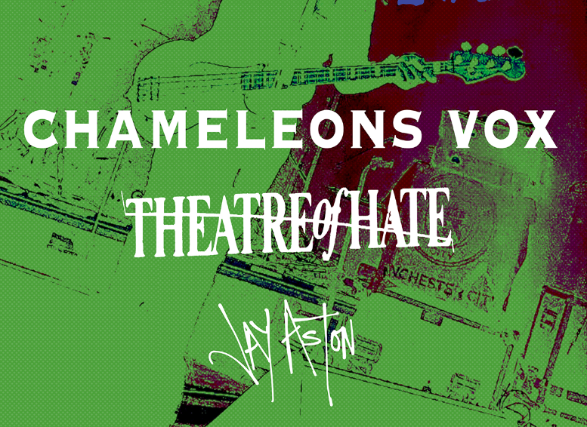 Fans of post-punk and new wave music are typically familiar with The Cure, Joy Division and The Smiths. These are among the league of legendary and adored artists that emerged from the UK in the late 1970s and early 1980s. However, there is a plethora of acts from this scene that are just as impressive that many people are not familiar with. At the top of this list is The Chameleons, one of the absolute best bands from the era who remain tragically obscure in the United States.  From Manchester, the group formed in 1981 and released three incredibly evocative and imperative albums before disbanding in 1987.

The band’s debut, Script of the Bridge (1983), is a sweeping, masterpiece from start to finish. Guitarists Reg Smithies and Dave Fielding weave brilliant melodies together while drummer John Lever hammers urgent rhythms away on drums and singer/bassist Mark Burgess delivers passionate vocals and kinetic bass lines. From the angry punk opener, “Don’t Fall,” to the breathtaking atmospherics of closing song, “View from a Hill,” this album is an essential classic.

What does Anything Mean? Basically followed in 1985 and continued with all the momentum that built with their first record. It’s beautiful, political, personal and mysterious all at the same time. The joy in tracks like “Perfume Garden” compliment the despair in songs such as “Return of the Roughnecks.” It’s another near-perfect album.

Their final and arguably best album, Strange Times (1986) is a tour de force that is brimming with angst, passion, lullabies and resilience. The previous two records are incredible and this one is even better. “Caution,” “Swamp Thing” and “Time. The End of Time” are just a handful of the majestically gorgeous tracks included. It’s a little more ambient and ethereal than the first two LPs and the songs are truly top notch. Shortly after their Strange Times tour, unfortunately, the band split up when their manager passed away and group tension became unbearable.

Burgess next formed a new group, The Sun and the Moon, with The Chameleons’ drummer, John Lever. Picking up where Strange Times left off, the band’s sole full-length eponymous album (1988) is a stunning and cohesive effort that seethes with disillusionment and sorrow that stems from the struggles of Thatcher-era Britain and the demise of The Chameleons.

From there, Burgess embarked on a solo career in the early nineties, releasing further excellent records, Zima Junction (1993), Paradyning (1995) and Venus (1999) before The Chameleons reformed in 2000, a move that nobody predicted or anticipated.  The reformed original band toured extensively and released one album of new material, the underrated Why Call it Anything  in 2001. They also recorded two discs of acoustic songs from The Chameleons’ back catalog and released a live 2xCD before dissolving once again in a pyre of acrimony and dysfunction.

In 2009, in a maneuver to keep the spirit of The Chameleons alive, Burgess began touring with a new band that he calls The ChameleonsVox. They primarily perform songs of The Chameleons live, but have also issued a few releases. To date, they have also released two EPs and recently just issued Strange Times Live, which was recorded last December in the UK.

The ChameleonsVox are performing live at The Sunset in Ballard on Friday, 18th October. To witness one of the best bands and voices of the post-punk era, we highly recommend this concert. According to the venue, this show is almost sold out. Whether you are familiar or curious, purchase a ticket soon. We trust that you will not be disappointed. Tickets and information here.