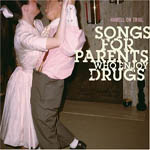 Songs for Parents Who Enjoy Drugs

"I used to be disgusted, now I'm pissed."

Prompted by the birth of his son, Ed Hamell is mad as hell and armed to offend. His new CD, Songs for Parents Who Enjoy Drugs (Righteous Babe), channels a new father's righteous anger at the state of the world and aims it straight at the heart of the Bush administration, both in literal attacks and in crafting characters sure to make Dubya's blood boil.

"Values" is the highlight, a spirited dialogue between Daddy and his foul-mouthed 2 1/2 year-old. The lad refuses to put his toys away, learn the alphabet, or share on the playground, basing his arguments on the absurdities proffered by the American president. Why put your stuff in the toybox when chaos rules in Iraq, or learn the alphabet when the Pres gets elected based on his likeability rather than his brains, or share when you can go isolationist and kick some ass? The song, a breathless rap over a repetitive sing-song guitar riff, is a perfect rebuke to the morality-challenged right's stranglehold on so-called family values.

But if he has no qualms over singing 'fuck' three or four times while playing a toddler, the gloves come completely off on "Coulter's Snatch" a below-the-belt swing at the bigoted bimbo of the beltway and her ilk. Hamell pairs his schoolyard taunts with a crunchy rock hook. Meanwhile, "Civil Disobedience" is an anarchistic romp of a hand-jive, exalting in the looting and anti-social behavior far more than the political statements.

But the lowbrow is Hamell's natural state, and he pairs that with parenthood as well. "Inquiring Minds" offers the best advice to breeders with checkered pasts: lie to your children. Admit nothing. Of course, if Junior ever gets ahold of this CD, Dad is busted: his songs exalt sex, drugs, more sex, and more drugs.

But if this all sounds dangerously close to the sophomoric likes of the Bloodhound Gang, be not concerned: Hamell marries his juvenilia to smartly-crafted punk-folk that veers from Ray Davies riffs (I challenge you not to start singing the lyrics to "Picture Book" at the open of "Inquiring Minds") to minor-key mood pieces to urgent acoustic punk to electronic beats to bouncy sing-alongs.

And if you're wondering how the baby's mama takes to all this, there is the touching love song, "Jerkin" to let her know that Hamell's masturbatory fantasies still center on the woman he loves, and "Mommy's Not Talking Today," a call-and-response tune in the tradition of African folk music which suggests that she may have just doubled her stress. Good luck, Mrs. Hamell.