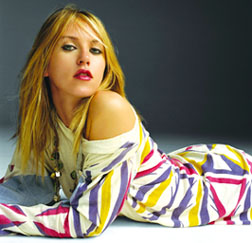 Oh NPR. You mean so well.

The Official Radio Network of Liberal Guilt just sent out a press release announcing that on Wednesday, Liz Phair will be a guest to discuss, well, here's what NPR says:

Funny, I'm the biggest Liz Phair fan on the TIG staff and I didn't even know she ever made an album called "Exit in Guyville."

OK, I know that was wrong. I'm sure there'll be lots to talk about, including the shows in New York, Chicago, and San Francisco where Phair will play her masterpiece 1993 album Exile in Guyville from beginning to end acoustic, and her forthcoming record and our tribute "Exile in {Imaginary} Girlville" show here in Seattle on June 25 at Chop Suey (tickets still available for $8 – shameless plug, I know).

If I were Liz Phair, I'd bring my own set of questions to ask because last time we checked in with The Bryant Park Project they were interviewing Sigur Ros and it might have been the most uncomfortable interview ever (and that means something coming from me because I'd rather go to the dentist than transcribe my interviews sober).

Liz, because I love you (I can call you Liz, right?), here's what you might expect: