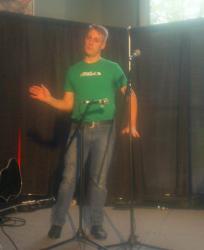 The Best of Folklife 2007: Central Services and Calvin Johnson

The Northwest Folklife Festival has more to offer than street buskers, yodeling, clog dancing, and seemingly-endless food lines. I made the trek out to Folklife this past Sunday especially to see pop darlings Central Services and twee deity (tweeity, if you will) Calvin Johnson.

First up was Seattle band Central Services on The Vera Stage. The band was introduced by an adorably maladroit young Vera volunteer, and they themselves seemed slightly awkward in regards to this happening: "Thanks, we've never been introduced before," drummer and lead-vocalist Kevin Emerson remarked before quickly launching into "She Was My Ride." The song fit perfectly into the awkwardness motif, with lyrics recounting an experience of putting the moves on a friend who turned out to be a lesbian ("I tried to kiss her, sitting on the curb beside her totaled car/She didn't stop me/Still, I should have known better than to take it much farther/ Then she came out to me").

Any such awkwardness quickly disappeared as Central Services progressed through their set. The band is in-between bassists at the moment and had local songwriter Hans York filling in for this show; that being said, their performance was incredibly tight and well put-together, despite having a stand-in member. There wasn't the smallest hiccup, let alone the major catastrophe that one might expect from a temporary arrangement. York fit right in with the group and it was clear that the creative juices were flowing for each member.

Central Services breezed through two more songs ("Fun (While it Lasted)" – one of my personal favorites and always a treat to hear – and "Tear Me Down") before spotlighting "Inside Out," a Hans York song featuring York on vocals and acoustic guitar. The singer-songwriter's somewhat folkish, somewhat jazzy tune diverged a bit from Central Services' sunny retro-pop, but was nonetheless quite pleasant.

After "Inside Out," Emerson spoke a word of thanks to York and we were treated to several more Central Services songs. They played the beautiful, down-tempo "Getting Better Lately" and, with a simple change in drum pattern, transitioned seamlessly into the more upbeat "Song '89" with its distinctive "Sha la la la"-laden chorus. Ironically, the band closed with "Get to You," the opening song from their self-titled debut full-length album. Despite being an opening track, it made for a great finish to a fantastic show.

As soon as I had reached the Central Services show, I realized that my camera was out of batteries, so I made a quick run to the drug store before heading back to Cafe Impromptu to see Calvin Johnson perform. I'm not entirely sure I can even express how thrilled I was for this show – as such a big twee fan, how is it possible that I'd never seen Calvin Johnson, a twee legend, play live? Madness.

Johnson started off the show by leisurely chatting with the crowd, speaking each word slowly and deliberately as he narrated his experience of applying to play at Folklife: "They had this…site…on the world wide web, and it said, uh, 'well, if you'd like to play, fill out an application and just send the application by this date.' And I was like, '………………….bummer! That date already…went by. Kinda too late.' But then it was like, 'But! We're still accepting applications.' And I was like, 'Oh…my kind of people.' " He went on, but in the interest of time, I'm going to assume you get the gist. I think it's worth noting, though, that in the middle of his account, he paused to remove his sweater and reveal (much to the delight of several cheering ladies) a tighter t-shirt which displayed, in bold letters, "IMPEACH" and featured a small K Records logo. I want that shirt.

After several minutes of anticipation, Johnson picked up an acoustic guitar and began his first song. A few strums, and there it was! That divinely deep voice that has sung to me so many times on my Beat Happening albums. It was incredible to finally witness it live, and looking around the room at the rest of the crowd, they seemed just as in awe as I was. Johnson bellowed over simple, rudimentary guitar strumming and somehow managed to turn it into something amazing. Partway through, the song reached an a capella portion and he momentarily set down his guitar, disregarding it in favor of the ability to gyrate and and twist in a way that might be considered dancing (but don't quote me). Whatever his movements were, they were certainly entertaining.

All dancing aside, he picked up and began to strum his guitar, segueing into a lovely melody with the lyrics "can we kiss?" (to which I found myself dreamily nodding my head yes). Eventually, the lengthy first song ended and Johnson reckoned, fairly accurately, "Wow, that song was like…ten minutes long." He then went on to chit-chat with the audience for a bit longer before continuing on with his other songs; while his good-natured banter was charming and engaging, the only downside was that it cut down on his already short set – he only played three or four songs total, if I recall correctly. But it's his show, and for what reason does one go to see Calvin Johnson live, if not to bask in all that is Calvin?