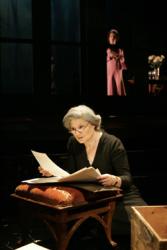 The Intiman continues its season with the world premiere of Craig Lucas' Singing Forest, an uneven and bloated wannabe-epic with nearly enough saving graces to keep it afloat for its 3.5-hour runtime. The play's best attribute is brilliant Anne Surria (pictured at right, foreground) in the central role of Loë Rieman, an 80-year-old ex-psychoanalyst living in present-day New York. She's a Holocaust survivor, a former patient of Dr. Sigmund Freud (himself a character, played in flashback sequences by ubiquitous stalwart Laurence Ballard), and grandmother to a famous and wealthy recluse named Jules (Jay Goede, who hams up his under-developed character into an annoying bundle of angst).

For one silly, half-baked reason or another, Jules pays a young actor called Gray (lovely Daniel Eric Gold, in a performance full of fresh charm) to go to therapy for him. Yeah. Jules has Gray relay his messed-up dreams to several analysts, one of whom happens to be Loë's slimeball son Oliver (efficient David Garrison), who is in love with a strapping young Starbucks® employee (Malte Frid-Nielsen) who works with Gray's wife (Intiman regular Kristin Flanders)!

See what I mean about bloated? And I haven't even gotten to Loë's extended flashbacks, in which everyone else plays at least one other role — Flanders is young Loë, Garrison is her dad, Gold is her persecuted homo brother — and the icing on the (beef)cake is Frid-Nielsen, whose alterna-part is that of a Nazi soldier who gets all-the-way nekkid in one not-quite-harrowing scene of sexual blackmail. (One of director Bartlett Sher's mistakes was choosing to have the actor cover tattoos on his back and arms with body makeup — it is painfully obvious, and even more distracting in this overwrought yet crucial scene than Frid-Nielsen's ample dong.)

So, yeah, there's just too much going on here, with too little that actually works: the eye-rolling narrative coincidences and ridiculous exploitation schemes, the almost offensively simplistic Sigmund Freud characterization (early champion of gay rights? I'm thinking not), and an ever-duller second act (of three!) that never. Seems. To end.

But it's not all bad. One of the aforementioned saving graces is John McDermott's fantastic scenic design, with a back-of-stage 'forest' crafted and lighted to make characters appear as though drifting through a clouded memory. Costume work is also first-rate, making character transitions seamless and instant. And, again, Scurria absolutely sparkles as the challenging (and challenged) Loë.

Too bad the play never really decides what it wants to be. Witty comedy? Brutal Holocaust drama? Zany farce? Touching family saga? It's a case of multiple personalities not even Freud could crack.