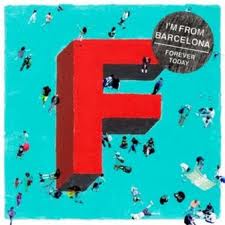 I’m From Barcelona is about to release its third album, Forever Today, which is the most happy-making album I have heard in years. It creates “bellies full of butterflies,” sounding like a pot-soaked circus of happy freaks playing in the city at dusk, belting out piano-pounded anthems of joy and fun, fun, fun.

It’s a popping party disc for depressives, filled with tickles and kisses and not even the strange electronic distance of house music in its search for trainspotter-into-dance floor utopia. Hand-claps and handed-out percussion about, wrapped around the expressive everyman voice of Emanuel Lundrgren, and I’m sure manifestos will be written against it by buzz-kills and downer-sounding doom lovers the world over. But its pretty pleasures will not get out of my head and I really, really needed it this still-cold spring.

27 people officially fill out the band (?!), which is like half of their homeland Sweden, right? Mostly played out and captured in two spring-loving blasts in Gothenburg in a little less than a week, it doesn’t sound anything like those chilly, nasty little bed-sit operas to heartbreak most indie labels are releasing these days. Media sources as mainstream as The New York Times and Rolling Stone have given into the sincere “charm” of the band, which starts here with the tweeting, bouncing giddies of “Charlie Parker,” roiling along to “Sing to me now bird, sing to me now bird!” Trying to reach out to the ones in the night, “the broken heart and the failure.” Like Jonathan Richman and Phranc at their most life-affirming and love-lifing, Lundgren is in this world to stay and spread a little 4/4-and-horns anchored celebration. You embrace his intoxicated gratitude and sobering passion with the sincerity of purity that it’s put into your ears.

Next up on the album is “Get In Line,” an ironically mass-chanted chorus with a perineum-pulling electro-bassline, and the first single that has been crackling over indie rock radio since February. Lundgren can feel a psychic pull from the city, “something moving inside everyone.” He and his revelers bring the laughing disco to the twee, and this is made absolutely clear on the bubbles and bursts of the clap-hysteric chorus. “Battleships,” the very best track on the album, comes up third, repeating over and over again, “I just wanted to see you my honey.” And yeah you fucking believe it. You may not even need the piles of keyboards, backing vocals, electronic drums to drill it in.

The warnings of “Can See Miles” (“they’re pretty and they’re smart / don’t let them get to you”) and “Dr. Landy” hint at things a little darker, but otherwise it’s “Always Spring.” I wholeheartedly recommend becoming enraptured by Forever Today, even if I have to mention that it reminds me either of the best-recorded 80s Christian rock album or gay theatrical music collection ever recorded. You know, that completely unironic giving to liberation, transcendence, yet still immersed in jingly pop-rock that rarely shows dystopia or disenchantment, but exists wholly in itself to fight it. “Somewhere it’s summer,” Lundgren sings, “somewhere it’s always spring.” What’s wrong with an album length smile, anyways? And I bet it makes everyone beam like crazy live.