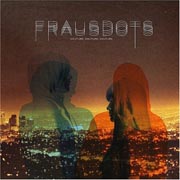 The Frausdots'debut record, Couture, Couture, Couture is teeming with influences: The Cure, Joy Division, Bauhaus and the like. But the name in the R.I.Y.L. list that should be bolded is Echo & the Bunnymen. It's startlingly uncanny how similar Brent Rademaker's voice is to Ian McCulloch.

Far from a newcomer to the indie arena, Rademaker is a name you might recognize: he played bass in both LA shoegazer mainstays The Tyde and Beachwood Sparks. Now Rademaker has partnered with Michelle Loiselle, who supplies spartan, yet sultry backups. Together, the duo has released a fine addition to any new-wave lover's collection.

The mass layering of harmonic vocals and minor-key, bleeding-heart guitars and synthesizers are a throw back to the days of heavy black eyeliner and matching nailpolish. Frausdots join a long line of similar bands recapturing this same sound, but Rademaker is at the front of the line. "If I hadn't been playing second fiddle in any band I'd ever been in, I would have made this record right out of high school," explains Rademaker.

Some of the best bets on Couture, Couture, Couture are the opening track, "Dead Wrong," "Current Bedding" and the slower beauty of "Soft Light." "Fashion Death Trends" is a fun little prod at the fashionistas (perhaps self-taunting; both Rademaker & Loiselle sport some haute couture matching tight suits and art-pop hair in the CD's artwork) but the lyrics leave a lot to be desired, sometimes coming across trite rather than witty: "Wearing long sleeves all summer long. Wasting my time and my money. Cheating my style in the same ol' ways, same ol' jeans just a different day."

Members of Rooney (Ned Brower) and even The Cure (synth player Roger O'Donnell) appear on Couture, Couture, Couture. In fact, the closing track, "Tomorrow's Sky", sounds strangely like a replica of The Cure's "High" off Wish, replete with chimes, a wanderingly melodic bassline in the same key as the Cure song. They have even thrown in a couple little "whoos!" ala Robert Smith (it feels almost like piracy).

Throughout the record, Frausdots throw perfect odes to their favorite new wavers and make obvious their influences. Time to wear your bangs long and in your eyes again, friends!