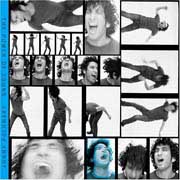 The Power of Sound

t's been eight years since singer-guitarist Jonny Polonski released his much-acclaimed debut, Hi, My Name is Jonny. Rick Rubin of American Records produced that full-length, and while not widely popular on the mainstream front, the album still had a huge following with music fans and insiders. No suprise as Polonsky was discovered Frank Black, and he was duly praised by Jeff Buckley, who called him "the great Jonny Polonsky" in an interview.

Polonsky, rooted in gliding, engine-cranked rock, is sort of your Matthew Sweet meets Frank Black meets Dave Grohl kind of songwriter. His songs feature thickly layered raspy vocals with poppy hooks and a heavy threshold for guitars (i.e., amps are at 11), infused with psychedelia and hard rock in pleasing proportions.

Now here comes Jonny again with The Power of Sound, his first full-length album in eight years. The record, released on Loveless Records, is a kicker, full of decent power pop tunes. Even with its strong vein of Foo Fighters throughout, it is not incredibly consistent from song to song. Regardless, it's a solid enough effort to kick the prodigal living piss out of some of the other crappy modern power-pop rock out there.

Leading off with the catchy "Let Me Out", Jonny stirs his audience, priming them for a rocking good time. But then he immediately switches gears with the darker, dreamy, more melancholic ballad in disguise "Even the Oxen." The two songs juxtapose harsh versus hushed, indicative of the dueling sounds that Polonsky explores throughout "The Power of Sound."

"Where the Signs End" sounds like a lost track off Melancholy and the Infinite Sadness (Smashing Pumpkins), Polonsky's voice near-perfectly replicating Billy Corgan's howl atop a churning and chugging guitar assault — but all the while a melody still sneaks in, weaving joyful pop chord progressions throughout the otherwise aggressive mix.

There are some odd moments. The otherwise likable "Shitstorm" concludes with a suspiciously mid-80s wailing sax solo, and on "My Secret Life" Polonsky's vocals get a bit Courtney Love on us: so many vocal tracks you wonder if they were literally phoned in, the phone-line static later covered up in post-production. But then comes in a stellar guitar solo to right "My Secret Life."

"Calling All Babies" is a highlight on The Power of Sound, the lush, feel-good power rock swelling to an epic, booming rock number worthy of lots of mainstream radio airplay.

It's good to have Jonny back. Maybe next time he won't put nearly a decade between full-length albums, taking the great moments from The Power of Sound and expanding on them for his next record.