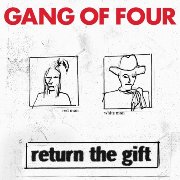 (On a dark Saturday afternoon Billy Bullock came over to my basement apartment and brought over a copy of the new Gang of Four album, a re-recording of some songs from their first three albums, along with a bonus disc of remixes by current artists. We would play the music from the two new discs against the original releases, and between smoke breaks, debate and explore the differences.)

Billy Bullock: Gang of Four were a pop band. The thing that made punk not like jazz, or something entirely esoteric and for the intelligentsia, to use a big word, is that they all came from a pop background, they were taking its structure, and they were warping it. They added in dissonance and lyrical content, writing songs that didn't have normal pop song subjects. Gang of Four took pop to its outer edges; on a song like "Damaged Goods" is an amazing pop song, or "I Found That Essence Rare," another fucking great pop song.

Chris Estey: These songs are all from Entertainment, Solid Gold, and Songs of the Free. Nothing from their wretched disco album Hard onward.

BB: Let's put in the new one — my favorite Gang of Four song is "Damaged Goods" off Entertainment.

CE: The Return the Gift version basically sounds like the original version of the song.

BB: The bass is a little bit heavier maybe. This is all the original members. Well, maybe their original drummer died. Possibly, but I could be off on that. (Billy is, thankfully they're all still alive.) This is the same song, it just sounds like it was recorded in 2005. Whoah, they sound a little monk-ish, when it drops down to vocals and drums. Now his voice sounds like Bowie.

BB: It's funny, one of my friends was at the Gang of Four reunion show here recently, and about halfway through the set his wife turned to him and said, 'Honey, we need to fuck. We need to fuck right now.' That's the thing about the Gang of Four. "Damaged Goods" is so incredibly dark, but it's all about sex. It's also one of the saddest songs ever. It'll rip your fucking heart out. But it's so sexy. It captures all the pain that's wrapped up in human sexuality, in this really interesting way. The lyrics are basically, "We're fucking, but I don't think I love you." It seems both the characters in the song are incapable of love.

BB: Hmmm, it has this almost tinny quality, but it has like this jagged edge.

CE: I think what's interesting about the redux is that it does sound like a younger band trying to do the Gang of Four.

CE: Whereas the original sounds like it's a bunch of young musicians getting together and trying something new. I don't if that's relevant or not, but there you go.

BB: One of my ideas of this review is — What is the point of buying this? It does sound very good and it is very well recorded, if you're in some little Podunk town where you cannot get the original versions, it's useful.

CE: They go in and out of print, so it does serve that purpose.

BB: I suppose Return the Gift is the 'gateway drug' to the Gang of Four, you know, the popular one these days. I want to hear what they do with the period that not everyone goes for, beginning with the "I Love A Man In A Uniform" era. It's that full-on disco-pop thing so much.

CE: It's an interesting how the re-recording of "He'd Send In The Army" uses some kind of synthesized drum effect between the exaggerated musical spaces, as opposed to the original, which was Hugo Burnham (or King, in accompaniment) hitting something with a stick I think. That had a nice, minimalist Joy Division feel to it original, as if it had been produced by Martin Hannett. That's a little too Laibach, that big racket.

BB: Ha ha! Yes, there was something really simple about it originally. Dude, that bass is just like all over everything. They totally sound like a new band.

CE: This song has a wonderful combination of sexual and military imagery.

BB: That's the whole thing of it. They link this very dark sexuality to all the politics they sing about; they were able to tap into the politics of modern sexuality in this really basic way that I think is unnerving. Their early songs made your skin crawl and gave you feelings that weren't entirely pleasant.

CE: Elvis Costello also explored these themes on Armed Forces, which I guess was musically influenced by Kraftwerk; it was a pop band's approximation of that mechanical style. But Gang of Four already had that mechanistic edge built into their rock.

BB: "I Love A Man In A Uniform" — this song is on the Karate Kid soundtrack! When I saw that I was like, "Gang of Four is on this?!"

CE: Songs of the Free, their third studio album and the one with that single, was tolerated by Gang of Four fans. It was moving in a disco direction, but still had a lot of lyrical substance, a few great tracks, and wonderful liner notes by Greil Marcus. It has been out of print forever.

BB: There was an awful lot of synthesizer on it, though. Everything was saturated by it; it would later go on to try to kill every Leonard Cohen album after 1982. It's using synthesizer instead of other instruments; which definitely shouldn't happen on a GOF record.

This version of "I Love A Man" could be on the radio right now, it sounds so much like Franz Ferdinand. "The new hot band from England!" This is the song I was most excited about hearing though, as the original was so synthesizer-based and 80s-sounding, and I enjoy hearing it more naturalistic.

CE: There probably could have been more songs off the third album on Return the Gift.

BB: But everyone wants Entertainment.

That's the one that ends up on like the SPIN most influential albums lists, etc. It's interesting something so politically extreme could be so influential. They weren't even originally described as Marxists, but the band claimed to be Maoists.

CE: I was dating a Marxist at the time their first couple records came out and got dumped and kicked out of the house; thus, the heartbreak of listening to the radio these days and going to shows.

BB: Well, Marxism is understandable, but Maoism is like — well, okay, back the truck up! Total revolution now. No theoretical stuff.

CE: Phil Ochs put a bunch of Mao poetry on the back of his third album cover. This is before Americans found out he was such a crazy fucker, with the Cultural Revolution and all the genocide.

BB: The thing is, anybody who has their picture on giant placards being carried around in mobs, I think that he's the first one to shoot.

This sounds so much like a current band, I almost wonder if they're doing this as sort of a tongue-in-cheek joke. What would be hilarious if they had, like, re-released these songs under a different name, and if they'd gotten like young guys to pretend to be the band, and put the album out, and could find out if anyone in the current press had actually ever listened to them enough to know they were listening to GOF. That would have been hilarious, and very Marxist, in a modern sort of way.

The thing that bothers me the most about the new GOF-inspired musical movement is that there's no ethos to it at all, and you know the most important thing about GOF is that they had an ideology. Franz writes grea
t pop songs, catchy, whatever, they're fun, but there's no ethos there. The Rapture has no substance; in fact, they might be almost like the reverse of GOF in a lot of ways, in that all that they have is their artiness. They are not utilitarian or proletariat all. There's just this sort of angular, aloof, artsy quality about them, but there's no content. They're rumored to be raging womanizing misogynists. And they were one of the first bands to bring the GOF sound back, ironically.

I guess you could have a band that's influenced by the Stooges, but you're not all shooting dope. But what we're listening to now is a really good example of what punk was — it shows the roost of Bowie, T. Rex, Hawkwind, art bands, and then they used the pop song format to get across a message or an idea.

CE: What's up with the remix record that V2 is including with the new album? It's various bands doing remixes of a band. We live in strange times, everything is in a computer now.

BB: I believe it's remixes of the originals, not of the re-recordings. Checking out Hot Hot Heat from Canada doing "Damaged Goods": It's rather boring. They're a decent pop band, but the original was actually catchier than this.

CE: Now the Yeah Yeah Yeah's are doing "I Love A Man In A Uniform" — Probably a good choice for them, being damaged art-disco.

BB: Totally. They're adding more disco back into it! It sounds a lot like the original, but I would rather almost hear this band cover this song than GOF's original. The Yeah Yeah Yeahs are a fun band, and they're one of the few bands from the New York thing that have almost no pretense of artiness. "We're a fucking pop band, and we're here to drink beer, and get fucked up, and roll around in our own shit on-stage." That girl is a bad-ass, she's here to party. She's like Chrissie Hynde; she's not pretty, but she's really fucking beautiful.

Ladytron handles "Natural's Not In," off Entertainment, and they're people who actually professionally do remixes already. So this is actually more interesting than when they throw the rock band in the studio with a GOF song to see what they do. Hear that? That's a remix! It's all a matter of taking it and making it your own to a certain extent; you're sort of covering it, but you don't want to lose the essence of the original song.

CE: Next up is No Doubt's remix of "Ether": That's kind of scary.

BB: It's just the bass player, Tony. I want to hear it to see how bad it gets! (Listening.) Actually, he's doing a decent job remixing too. He's bringing out the dub elements. No Doubt is a great example of what a pop band should be. And here Tony makes this song into one of the best things here, using exploding melodies and sounds like African instrumentation. He added a hook into the middle of the song without losing what the song was like.

CE: That might be the pull quote, if they run this: "The Dandy Warhols make the Gang of Four sound like Nine Inch Nails on the remix album!"

BB: I was a big Nine Inch Nails fan growing up, and this is a good example of the difference between what that is and what we know of as alternative and punk, is that NIN is about "the pain that is within me," while punk is more about compassion for other people. Even the snottiest, angriest punk, of like the Sex Pistols, addressed the pain inside themselves through overt denial of that, embracing it publicly, a sort of universal cry that is compassion. Punk is either about compassion or a lack of compassion. You don't even need to have the specific ethos that Gang of Four had; that hope was inherent in the noise that they were making.