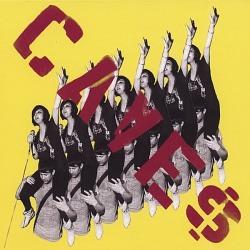 Get on With It

Q: What do you get when you put The Police, Franz Ferdinand, and Corey Hart in a blender and hit pulse?

A: You get Portland's self described "funk-art" band Caves' album Get on With It.

I was SO ready to dislike this album. On their website, Caves cite the Police, the Clash, Television, and several others very promising influence. The name check of the Police gave me pause at first blush. I am not a huge Police fan, and think a lot of their pseudo-reggae-dub sound gets a little monotonous and repetitve (I think I blame at least 50% of my dislike of them on the latter-day sins of Sting, which is totally unfair, I know, but that's a tiger of a whole other stripe…Brand New Day makes me wanna chew through my desk…).

The opening track "Curiosity" most definitely had the Policey trademark "braap, braap, braap" guitar and dub-riffic bass, and even the requisite yelp of "Oi!" My eyes immediately rolled to the back of my head and I tried to think of a way to either give the album to another reviewer or find a nice way to say I hated it.

Don't worry, there's a Green Eggs-n-Ham end to this story…

I listened to the entire album once. Then I listened to it again. By the third time I listened to it, I had fallen in like with it. After listening to the better tracks several more times, I developed a soft spot for them in a serious way. Lead singer and guitarist Jacob Carey's vocal delivery ranges from soft and husky like Corey Hart to the more pop-n-roll bravado of someone like the Killers' Brandon Flowers, something that instantly gave me a warm fuzzy and made me want to go rollerskate or braid a Barbie head. The more synth-heavy tracks are high-energy and a blast to dance to, and definitely pay homage to their pop and punk forefathers while breathing a bit of their own life into them.

Despite not being a Police fan, I am a huge 80's fan. Being a child of the 80's I was brought up on Crowded House, The Jam, Cutting Crew, and the like and loved them all deeply and intensely. The title track "Get On With It" could have very well been recorded in 1983 by any one of them with its power chords, deep dub bass, and innate ability to get your fists pumping and belting out every word. Anthemic is the first word that comes to mind. It is loveable in the way that something like "Love is a Battlefield" is.

The best track, far and away is "Rock You to Sleep," ironically, the most Police-y of them all. The lyrics are simple and sweet: "If it's me you choose to keep, I promise I'll rock you to sleep. Darling, let me make this clear, I am nothing but sincere…" They are well-matched with the dreamy sway of the instrumentation of the guitar and synthesizer. It is a total hairbrush song.

The album is, admittedly, a bit top heavy. The best tracks are the first four, and as Get On With It progresses, there isn't a marked change in sound or style. The instrumentation and vocals are relatievly indistinguishable from one track to the next after "Rock You To Sleep." Despite this, it is still high-quality, but a bit disappointing after the halfway mark. "Optimist / Pessimist" sounds like a Killers or Bloc Party B-side, which is to say it knows its audience, as does "Metaphysical [Let's Get]", but felt stale and left something to be desired overall. A similar thing occured with the lyrics.

From time to time, they went from simple and sweet like those of "Rock You To Sleep," to trite: "You're so metaphysical, you're so intangible, I know it's hard to believe…" Lyrics are something that can easily make or break a song for me, even if I don't particularily love its sound. There were a couple tracks (see also "Closure") that were definitely a challenge to listen to because of the lyrics. As this was my first exposure to Caves I had hoped to hear more of the shoegaze sound they are so commonly cited and loved for, but it would have probably been inappropriate on such a pop-heavy album. Their effort is definitely cohesive in sound and theme and I can imagine they are an excellent band to see live.

Check them out on their MySpace page. Follow their instructions: "Load It, Learn It, Love It."