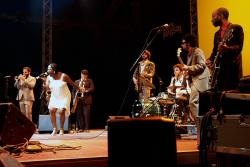 Sharon Jones & the Dap-Kings at the Showbox at the Market

When I last wrote about Sharon Jones & the Dap-Kings a little over a year ago, I was afraid that I might have been a little excessive with the hyperbole. I pretty much wrote that their December 2007 show at Neumo’s was the closest thing an atheist could get to a religious experience. Actually, that’s almost exactly what I wrote; I said, “the sold-out show at Neumo’s… was as close to a religious experience this non-believer could experience.” I knew that I left Neumo’s feeling like I had seen one of the finest shows of my life but would that experience hold up after giving some more time?

The idea that we could still get blown away (even after reviewing over 60 shows between Sharon Jones & the Dap-Kings shows), is why we continue. Was I equally blown away last Saturday when the person I said was the natural heir to James Brown’s legacy came back to Seattle and played the Showbox at the Market? In a word, no – but the night was pretty spectacular anyway – and the hyperbole I spent was justified.

Sharon Jones is the fifty-two year old singer, who has a voice bigger than any room she’s in. She is a commanding presence who demands – and gets – the attention of everyone in the club. There is a scene in the Jack Black vehicle School of Rock where he counsels a young girl in his rock band who is conscious of her weight by saying that everyone wants to party with Aretha Franklin – Sharon Jones didn’t need that lesson – she already knows.

After a set from the acceptable Ivan Milev Band, a violin and accordion duo that killed time, the Dap-Kings came on to the stage about 10:25. At that point, everyone in the Showbox knew they were watching professionals. The Dap-Kings jammed for about 15 minutes before bringing out Sharon Jones. The Dap-Kings are an eight-piece soul/funk band that is both the tightest band you can watch and they still sound incredibly loose. They sound like a big part of the set is improvised yet also like they’ve perfected the act over several years.

A little over a week before the show I turned thirty and I found watching Jones exhausting. She has boundless energy and for nearly every song she brought people on stage to dance with her. A few were disobedient and/or bad dancers, so she banished them back to the crowd. She was a populist, though. The people she brought on stage varied in their size, age and gender.

For about two hours, Sharon Jones & the Dap-Kings delighted the crowd full of NPR listeners. While I found Jones and the musicians that back her fantastic, the crowd made for a difficult evening. While the show was all-ages, I would guess the median age of the crowd was over 40. It meant that the bars were full and we all had to wait in line for the bartenders to mix martinis. Say what you want about indie rock/hipster crowds, but those crowds don’t order drinks that require a shaker, or use flash photography.

For that 2007 show I wrote about last time, I had to leave my closest friend’s birthday party early to make it to Neumo’s for the show. I felt guilty until I knew how remarkable the show would be. This time, my friend made sure that he was there.