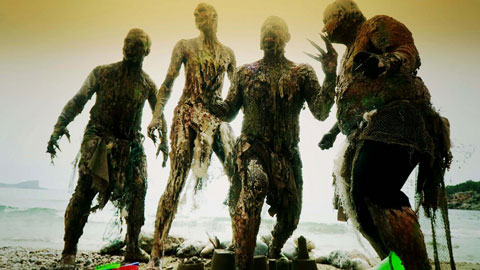 Gettin' MIFFF'd this weekend: My picks for possible Splatter

Since I'm mainly interested in splatter and gore (lots and lots of it), I thought I'd make my picks for the Maelstrom International Fantastic Film Festival based on what I think will be the bloodiest. So, here we go:

Midnight Son (opening night, Friday 9/16 @ 8pm): This vampire-esque tale is about a dude who has to drink blood to live, but is apparently having trouble containing his urge to murder everyone in the most violent way possible. Splatter potential: HIGH. The short playing with this (Juan Con Miedo) looks like a typical "don't trust the kid" cautionary tale. Being a fan of creepy children, I'm down for that too.

Abstentia (9/18 @ 6pm) looks creepy and wrong in all kinds of ways! Missing husbands, hallunications, secrets, etc. Watch the trailer, you'll see what I mean. Splatter potential: Minimal, but there'll probably be lots of jumpy scares….which can sometimes be just as good.

Of course, I can't miss the Horror Shorts (9/18 @ 2:30pm)! Some standouts: Fitness Class Zombie – (how to lose weight the undead way, oh man, I love that), Brutal Relax, and Junk Bonds: The Return of Junk Bucket. Splatter potential: HIGH

The Melancholy Fantastic (9/18 @ noon): I'm not usually a fan of things labeled "existential" but dolls SCARE THE BEJEEZUS out of me. Especially talking dolls. Especially life size talking dolls. Shades of May? Bonus: a seriously disturbing short called Facing Rupert about a guy who absorbs his unborn twin in his own brain plays with this one. *shiver* Splatter potentional: If I can make it through the whole film without bolting, I'll let you know…