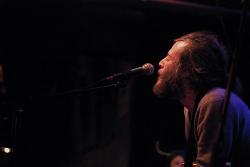 Getting down with Delta Spirit

I wasn't sure if I was even going to make it out to the Tractor on Friday. After getting four blocks from home and having the car break down things weren't looking too good. But when there's a band you really want to see and you've got a review to write, you find a way to get there. And so an hour later with a borrowed car, my brother and I arrived at the Tractor to a packed house.

Regrettably we had missed opening band Dawes, rumor has it they were brilliant. But the good news? We caught Oklahoma band Other Lives (singer Jesse Tabish, right) halfway through their set. They put on a stellar performance with piano, cello, guitars, drums and a violin. They even brought in a guest trumpet player for a song. The songs, to put simply, were beautiful and to hear them live was fantastic. My brother said it sounded like "perfect soundtrack music," I agree. Next time they hit Seattle, I recommend being there.

Delta Spirit took the stage at 11:30. If you've never heard Delta Spirit before, the best way I can describe them is a west coast quintet playing southern soul rock-n-roll with lyrics from folk songs. They opened with "Strange Vine" a track off their debut album Ode to Sunshine. The song reminded me a little of The Walkmen's "Louisiana" which surprised me because I never would have thought of comparing the two. When they played their second song, "People C'mon" they already had the crowd clapping along. It was strange to see so many people there with such excitement and
crowd interaction.

In between songs lead singer Matthew Vasquez spouted "We're headlining, holy shit, we're headlining and you showed up. We couldn't thank you enough. This is so weird for us, you don't even know." Well I know a little bit, the last time I saw Delta Spirit they opened for the Cold War Kids to an empty Nuemo's with maybe, maybe 40 people there. If my memory serves me right it was their first tour out of California and they seemed a little scattered. Fast forward three years and they're headlining the tractor to what looked to be a full capacity crowd. It's always nice to see a well deserved band move up the ranks.

These boys were confident now and demanded our attention. They played tight and rocked each song, you couldn't help but tap your feet, bob your head or dance. That might have had something to do with the beginning of the set when Vasquez declared "Let's all have fun tonight, even the cool people, I hate cool people." Some people laughed, some were silent, but watching the audience I think he might have actually gotten through to everyone.

Four or five songs in and the place turned into a party. What easily could have been a stoic, slightly head bobbing, typical Seattle crowd turned into a dancing friendly overjoyed one. It reminded me of one of those parties you go to where everyone is so drunk they constantly cheers each other. It was kind of like that but with a fine live band in front of you.

The band jammed guitars, drums, a piano and a harmonica most of the night. Another instrument, not to be forgotten is Matthew Vasquez's voice (right). It's a voice that on record sounds great, but on stage comes alive with fire and grit. He sings and he screams; he gives you his heart. He stepped three feet back from the mic and screamed, and you could still hear him. Its a voice that makes you realize the guy was born to do this, and makes you wonder if he survives on throat lozenges and chloraseptic.

Later in the set for the song "Trashcan" they of course had to bust out a trashcan lid. Multi-instrumentalist Kelly Winrich held on to the lid and a tambourine and banged on it with a drumstick. Other songs included multiple drum parts where they played a drum with maracas. And at one point even had four people all wailing on drums, amazingly ending the song together perfectly. They also brought back out Other Lives guest trumpet player and had him play a song he had learned just thirty minutes prior.

All in all they got through a little over a dozen songs and played for about an hour and fifteen minutes with a quick encore in between. They had the crowd in their palm most of the night. Delta Spirit is a passionate band and their vibe is infectious. They make you want to believe in something again. They bring you up when your down, they cleanse your soul. Thank you Delta Spirit, good luck on the rest of your tour.