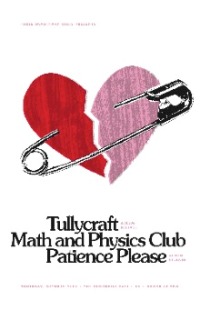 Giddiness, Giveaways, Vampires, and other reasons to be excited about our show at the Crocodile TOMORROW!

Tomorrow's the night we've been counting down to… we get to celebrate the long-awaited release of Tullycraft's fifth album {Every Scene Needs A Center}  AND the release of Patience Please's debut full-length {Fleeting Frequencies}.

Twee-pop darlings Math and Physics Club are also on the bill and with that much sweet, jangling indie-pop on the bill, we have a night that beats out the evening's competition (Interpol who? Pogues what?) with genuine indie-pop wit and vigor. An on-stage dance party will certainly ensue.

We're soooo giddy about the show, we've got a couple giveaways to mark the occasion:

The Tullycraft album isn't out yet, although we've gotten tastes here and there with some tracks being played on KEXP. There's a couple MP3s floating around with some other bloggers and websites excited as we are.

Pitchfork says "The Punks Are Writing Love Songs" "is another catchy, clever, confrontationally cute scene-skewering from the group."

The Seattle Weekly is looking forward to the show, and that the band's "joyous tone and energetic live show make for a damn good time."

And to put the cherry on the giddiness cake, we're going to prep for the show by watching this video from the Chicago show (mentioned in the Seattle Weekly write-up above) for the new Tullycraft song "Take Away The Make-Up" recorded a few months ago. The song usually requires the audience to join in for it to be a smashing request… so don't make me have to carry that chorus by myself!