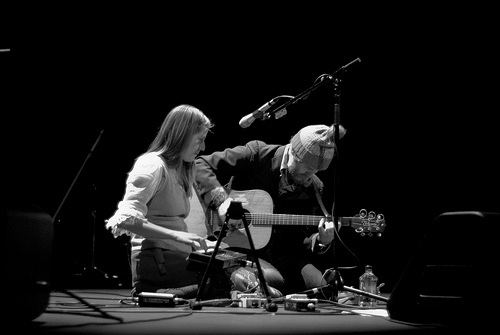 Somewhere in the midst of plush seating, complete and utter emotional annihilation, and a sea of gorgeous cartoon owl-laced merchandise lies this fall’s Swell Season tour. Showcasing to many a seated theater across the states behind last month’s release of Strict Joy, Glen Hansard, Marketa Irglova, and ninety-nine percent of the Frames swept last Sunday’s crowd at the Paramount through one of the most compelling sets I’ve seen in recent years. Moving seamlessly from duo opener to full band to solo-singer-in-a-spotlight and back again, the show that these honest, earnest musicians put on was nothing short of true genius.

Glen and Marketa took the lead for the bulk of the opening songs (hence the sea of Glen photos), and proceeded to filter in the rest of the Frames for another half-dozen songs before Glen took solo center-stage rights mid-set. And this, as they say, is where the proverbial magic happened. What happened during Glen’s solo piece of the performance rivaled even his mindbending set in Austin this past summer — complete with a series of broken strings, a raging Van Morrison cover, and a rendition of “Say it to Me Now” microphone-free from the very front edge of the stage. Unlike some recent seated performances we’ve attended lately, this crowd was rapt — absolutely and utterly rapt — with attention for every moment of every song. And in-between fighting off a full-on sob festival and losing my lens cap, I took note (and very much appreciated) the lockdown that the Paramount staff imposed on seating, ushering in a few people every three songs or so and only during breaks in the performance.

Thanks to our inner fifteen-year-old fangirls and an Olympic-worthy range of arm’s reach, I was happily presented with the setlist post-show. To wit:

Falling From the Sky
Lies
Low Rising
In These Arms
The Rain
The Moon
If You Want Me
Fantasy Man
Say it to Me Now
Leave
Backbroke
Astral Weeks [!!!!!]
Colm [violin solo]
Rise
The Verb
I Have Loved You Wrong
Once
When Your Mind’s Made Up
—
Falling Slowly
Shannon
(New Song)
High Horses
Thomas
Red Chord

The true, raw emotion of the night coupled with a gorgeous stage setup and a flawless, get-this-person-a-raise kind of sound left us breathless, with hearts happily wounded and the photographs to prove it:

{Make sure you check out the rest of the shots from Sunday’s show in the imaginary flickr pool!}