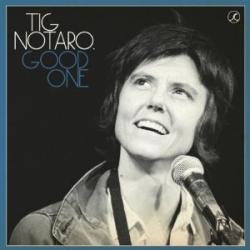 Can you believe Tig Notaro has been doing stand up for 14 years? I can believe it. I can totally wrap my head around that (as she says about getting news about a friend's five year old child starting kidnargten and being asked, "Can you believe that?" because yes, she can). Even though her super-casual, silky smooth but somehow adorably a little bit anxious, coffee pal style of comedy smacks you as fresh as a shower to an infant, only a vet can pull that off.

Yet now Secretly Canadian has extended their picky taste in exceptional independent rock to alt-comedy, and Tig has her CD debut out this week, full of warm, generous, empathetic, and sometimes a little creepy (in a cute way) material with titles like "Little Titties," "No Moleste," and "Taylor Dayne." All three of these bits were high points of her dominating the comedy stages at Bumbershoot last year, and they fall into that arguably rare category of recorded stand up you want to hear again and again.

"Little Titties" is catch-phrase humor, the kind of joke you'll share over and over with whoever you hear it with, but has a wonderful message about keeping your mouth to yourself no matter how inspired your social observation may seem in the moment. Along these lines, she also harshly criticizes the ubiquitous crap-conversation mood-killer, "I just threw up a little in my mouth" (and its twin brother, "I just peed a little in my pants"). A review of Good One came out this morning which critcized her for using that phrase too much on the album; which is kind of ridiculous, considering she's only using it to criticize the too-gross imagery meant to match an easily offended response. (Comedy album reviewers, take note: Listen to the punchlines, not just the catch phrases being discusssed.) These are also phrases which annoy the hell out of me, and do something really nasty to Tig, but I'll let you hear what that is.

While much of this material is droll and restrained and about Tig enduring life's wacky humiliations with a sparkling stoic bemusement, "Taylor Dayne" finds our comedian getting into full-on daytime performance art mode, semi-stalking the semi-retired Top 40 diva with a robotic Droste effect of compliments after she's initially waved off. Her persistence in having some effect, any effect on the singer (or actress, or singer, it changes over time) who can't actually perceive the humanness of who she's dismissing is a hilarious way to remind people to actually listen to how they're coming off. It's the funniest riff on warning against taking one's self too seriously I've heard in a while, a message that never goes out of date.

I highly recommend Tig's long-awaited SC debut (which, as a bonus, comes with the Have Tig At Your Party DVD, containing appearances by pals/colleagues Sarah Silverman, Zach Galifianakis, and Nick Swardson), and seeing her when she comes back to Seattle (which can't be too soon).