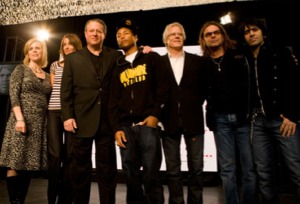 Usually, I wouldn't be in favor of a RHCP concert, but dangit it if Al Gore hasn't convinced me to feel otherwise… now if he could just get the Republicans to go along with it.

As reported on Reuters.com, Al Gore is working on a plan to have seven worldwide "Live Earth" concerts on July 7th (easy to remember: 07/07/07) and was hoping to have one in the nation's capitol… specifically, on the National Mall in the U.S. capital.

Unfortunately, it looks like ye olde no-fun Repubs are pooping on the party and blocking the concert from taking place on the National Mall in the U.S. capital.

Some Republicans say it is because two other groups have dibs that day. Others are citing it all comes down to the fact that, as I've long suspected, Republicans can't stand the thought of people having fun and making a difference (while listening to Pharrell). "(Republican) Senator Inhofe objects to having any events on the Capitol grounds that are either highly partisan or politically controversial — and the proposed Gore concert is both," said spokesman Marc Morano.

Keeping a good attitude, Chad Griffin, a senior adviser to the Live Earth effort said "While it's unfortunate for the American people that we are being blocked from staging the U.S. concert in our nation's capital, the show must go on, even if it's in another city."

"This will bring tremendous revenue and worldwide exposure to whatever U.S. city ends up hosting," he added.

It looks like the line-up is far from firmed up (seeing as they are still looking for a welcoming place to call home), but I've got high hopes for this one. I'm fairly certain that some of our favorite loveable lefties will be there.