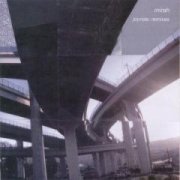 Back in 2002, a man named Sean Combs came along and said, "let's make a remix" and put out an entire album of just that. It was called We Invented the Remix, Volume 1, and it was nothing short of revolutionary; thousands of DJ foreheads were collectively slapped. The album was a number one hit, clubs were again packed with people dancing and DJs getting laid by women far outside of their league.

This brings us to Joyride, the latest album from Olympia-based musician Mirah. It's a collection of some of Mirah's best known songs, put through the remix blender. The (mostly, but not exclusively, Northwest) luminaries lending their time and talents to this project include Guy Sigsworth (of Frou Frou fame), Scream Club, Phil Elvrum, Anna Oxygen, and YACHT. The two-disc set includes 22 tracks (18 different songs) remixed by 19 different artists.

The remixed versions of the songs are a success for the same reason the originals work: Mirah Yom Tov Zeitlyn possesses the sweetest voice you're likely to hear in music today and she writes great, minimalist pop songs. Of course, not every song on Joyride works, but that should hardly be unexpected. Just as the book is usually better than the movie, nine times out of ten, the original song is better than the remix (according to my imaginary calculations).

In most circumstances, it would be odd to sight that my favorite remixes are two versions of the same song: both versions of "La Familia," a gem from Mirah's first (and probably best) LP You Think It's Like This But Really It's Like This. The mixes come from Guy Sigsworth and Chris Baker, but neither significantly differs from each other (or from the original song). This is a memorable pop song (albeit a risqué one) and Sigsworth and Baker tinker with the music a little bit (including lowering its volume) and add a few effects, but both improve the original song because her soothing vocals are drawn out more.

Conversely, the most questionable track kicks off the second disc with Mt. Eerie's Phil Elvrum remixing "Don't Die In Me." Elvrum adds some scratches and skips, but rather than sounding taking a Grandmaster Flash feel, it sounds more like my kid sister scratched the disc up beforehand. To his credit, though, Elvrum has produced many of Mirah's prior albums and has done an exemplary job for the most part. Fortunately, there is another (and much better) mix of this song on disc one by Bryce Panic. The most ambitious mix probably belongs to YACHT, who put the harmonies on "Make it Hot" through a vocoder, and it makes for the best dance track on Joyride.

I've always sort of believed that Mirah was born a few generations too late. She's always been an interesting artist and has made some terrific collaborations (see, for example, her album To All We Stretch the Open Arm with the Black Cat Orchestra), but I've also thought it would be ideal if she'd record an album of pop standards. It's easy to picture Mirah being Cole Porter's favorite muse if they were from the same generation.

Overall, Joyride has some great tracks, some that are forgettable, and some that are inconsequential. If you are already a Mirah fan, you'll probably jump at the chance to hear her tremendous harmonies. If not, it's not the best introduction but it's more than enough to hold you over until her next album.