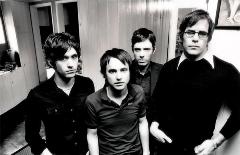 Christmas is a time to say I love you, and nothing says I love you like homemade Christmas treats. So on December 19th I set out to take time from my imaginary schedule to make rumballs, the world's greatest confectionary, as 1) they require no baking, and 2) they can get you drunk.

In my eagerness, I tripled the recipe. Carpe diem, ho ho ho, and everyone loves rumballs, right? Then, kneading in ground vanilla wafers, pecans, and melted chocolate up to my elbows, the phone rang. It was Chris Estey, asking if I wanted to be his plus one to see Gosling, the former- Northwest- band- formerly- known- as- Loudermilk, recent signees to the fabulous V2 Records.

Out into the wet night we went (via a Mars Bar stop for deliciously gooey mac & cheese), arriving at El Corazon, just as Gosling was winding up their recondite, roiling set. Santa couldn't have delivered a better musical gift himself. Chris noted the, "Great Brian May-style guitar and keys and from maestro Mark Watrous, aggressive yet idiosyncratic enough to be compelling vocals from Davey Ingersoll, and some of the best drumming we've ever seen from Isaac Carpenter."

Since changing their name, Gosling relocated to LA, and have recently been touring with another band that briefly called Seattle home, Your Enemies' Friends. Gosling released an EP on local Northwest label The Control Group, and their MySpace page bloggingly chronicles a full length under way.

"It's rare we see a band capable of mixing up chorus-pumping raw power, abstruse songwriting, sometimes showtune-dabbling melodies, and machismo-drenched garage rock intensity. But then, their list of influences on their website page includes Queen, Nation of Ulysses, Engine Kid, and Grand Funk Railroad, and that makes a lot of sense. Somehow, so does the Scorcese and Poe listed…"

I wonder if they have Fanny Farmer or Martha Stewart in that long list of influences? Perhaps then they could help me with the rock of batter that hardened on my kitchen counter. Tell me, Gosling: can these rumballs be saved??!

{And when is that full-length due out, anyways…?}