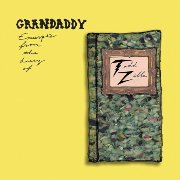 Excerpts From The Diary of Todd Zilla

Jason Lytle keeps varying his facial hair arrangements, hiding in his apartment from the Modesto, California sun, testing his woman's patience with his addiction to good weed, video games, and oh yeah electronic recording gear ("I wouldn't call it fucking addiction, man"). He scampers between a real studio (in his home) and the bedroom studio, the former where he was supposed to follow up his last album Sumday a few years back sometime, I don't know (he doesn't either). His sweet voice and personally-inflected keyboard-psychedelic competes with the sound of the weed whackers next door.

One day Lytle was riding behind a big fat-ass monster truck thing and the dude driving had a license plate that said "Todd Zilla." So he wrote an EP worth of songs based on this idea, who might drive a god-awful thing like that and display his steroid-popping hubris for everyone stuck behind him in gridlock. (Myself, I think that's pretty funny, and I didn't even get the pun until I stopped taking a certain medication last week.)

The record starts with the gently-enchanting Brian Wilson acid-agoraphobia 80's synthesizer power pop of "Pull The Curtains" ("Sometimes you got to say this is going to be the day, and then sometimes you got to say there is no fucking way"). From that point, Todd Zilla is a mostly pretty, lethargic sun-baked crawl past rent-a-cops at mini-malls with fistfuls of Gatorade, pulling pranks (the elegant and awesome "Fuck the Valley Fudge"), though the tempo rises again for the awkwardly aggressive Bic flicker, "Florida" ("Good afternoon from the bar in the mall, they sent me home from work today — my ex-girlfriend's a model in Florida").

With a lyric sheet that reads like a good chapbook of poetry, a dissipated but non-menacing vibe that recalls a Celexa-sedated post-Silicon Valley Hawks & Doves by Neil Young, and a couple of Grandaddy classics to hold us until Lytle returns to his more keyboard-based experiments on his next full-length, this is a tasty food court slice of we-gotta-get-outta-this-place homemade space rock.