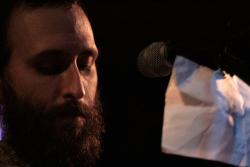 Grand Archives at the Croc

As long-time readers of TIG know, my love for Seattle band Carissa's Wierd knew no bounds. During the early years of the site, I spent endless hours listening to their records and attending and writing about their shows. When the band played their final show, a bit of my imaginary heart broke with it. Then Carissa's Wierd frontman Mat Brooke and drummer Ben Bridwell went on to form Band of Horses, and well, you don't need me to tell you about Band of Horses, now do you? The band earned international fame for its glorious Sub Pop debut, Everything All of the Time, earning both critical fame and adoration of fans. Then Brooke quit that band too.

A month or so ago, rumblings emerged about a new Mat Brooke project called Archives. I was excited, but guarded, in many ways afraid to fall in love with yet another Mat Brooke band, only to have the band dissolve before my sad imaginary eyes (and ears). I thought I'd have time to nuture an infatuation with this new band, perhaps continue to see other people while waiting to see if I could really put my heart on the line for Archives.

Then things moved incredibly fast. The band played one show with Sera Cahoone, posted a few demo tracks to their MySpace page, changed their name to Grand Archives… and then as quickly as you could mutter "HYPE MACHINE," Pitchfork praised the band to the sky, they got added as the opening band to the Modest Mouse tour, and then Sub Pop signed the band. Wham! Bam! Thank you ma'am! No time to see how our relationship was going to unfold here! Either I was jumping into a LTR with Grand Archives right now or I'd be left bemoaning that I didn't see them when while watching the Behind the Music episode years from now, or squinting at them from the back of some lame-o arena show.

I wasn't about to let that happen, so I hopped about the Grand Archives express. All aboard!!

First up, I should mention the night kicked off with two supa-fine Seattle bands: The Lights and Welcome. It's been so long since I'd seen the Lights, I'd nearly forgotten how much I love his flat crazy voice and their Mission of Burma-like wrangle-jangle discordant punk flavors. Both bands put on fine sets with enthusiastic responses from the audience, especially for Welcome, as this show was their CD release show (not that they told the audience this or anything else, really. No banter from this band, they just brought the rock).

When chatting with Mat Brooke earlier in the night (and yes, I was super nervous to talk with him, though he was actually incredibly friendly and cool), we both expressed our love for the Croc as a venue. While I didn't record the chat, he said something to the effect of how he normally likes a venue with a backstage area, as he needs to pace and freakout before a set… but at the Crocodile, he doesn't need to, because it's so comfortable there. I would say Brooke's new band agrees with him like playing at the Crocodile does: it just suits him. At the show, he was clearly in his element, happy and excited and honestly humbled by the crowd's over-the-top eagerness and the band's successes. "We've been across the country at shows we had no business being on, cause we're us and Modest Mouse is them," he joked.

Musically, Grand Archives fall somewhere between Carissa's Wierd and Band of Horses. Their sound has a gentler overall brushstroke to it, as CW did, but sans the forlorn stylings, somber violin, and overall bleak mood. After knowing Brooke as the CW frontman, it was a bit startling to hear him banter and — gasp! — smile and crack jokes onstage. It was great to watch, actually.

Grand Archives also have a bit of country flavors around the rim, but not so prominently as Band of Horses. Mostly, Grand Archives reminded me of throwing back to a far older era than Brooke's lineage; to me, the wistful yet confident male harmonies brought me back to the sounds of Crosby Stills Nash and Young, or even America, or Todd Rundgren, or Loggins and Messina, or — ahhh God, I can't believe I'm typing this — the fucking Eagles (no not this band, this one). The beards did nothing to dissuade me from these impressions. Grand Archives has a positively late 60s – 70s post-hippy feel, Helplessly Hoping for a Peaceful Easy Feeling for Sister Golden Hair Surprise.

The band is so new, Brooke kept what were presumably lyrics taped to the microphone stand throughout their eight-song set. Their second song was "Sleepdriving," a breezy, acoustic guitar filled, dreamy pop number with gorgeous four-part harmonies that typified all the Grand Archives songs. And when I say four-part harmonies, I mean glorious, spot-on, perfectly-melded-in-a-world-of-harmony vocals. If there's one thing that will define this band (beyond the legends of their catapault to fame), it's the extraordinary power they quietly lend each other by sharing vocal duties, to great effect.

Next up they played my favorite from their four-song demo, "Southern Glass Home," with the beautiful lyric, "Let's forget I was pretending, let's pretend you knew it all along." The song is definitely reminiscent of the similarly named "Southern Cross" by Crosby Stills and Nash, only updated, better, and live the vocals on the refrain were belted with gusto, and the drums were kicked and pounded with full sticks and stomps (versus brushes), lending the song an overall poppier, stronger feel, and I think the guys had fun playing it that way. They've only been together a month or so, and they're already modifying. I love it.

The next three songs continued in with more of a pop sensibility, with the "Ooh ooh" refrain in song four and the "Bah Bah Bah" handclap chorus on song six that was particularly baffling, though quite entertaining and good. Brooke prefaced the sixth song with, "You know, I'd say this is a new one, but we haven't been a band long enough to say that."

He wasn't kidding. When I told one of the band members (who shall remain nameless) that I was surprised by all the handclaps and bahs, he confessed, "That song is so new, we don't have lyrics for it yet, so that's why we sing it with the bahs." I was amused but kinda awestruck. We all had just witnessed the start of something truly, truly new and lovely, so new that the band itself didn't even have lyrics yet. And they were so pro, we had no idea. Brilliant.

After the handclap number, Brooke told the audience to assume the band had walked offstage, that perhaps we, the audience, had clapped, and that from here forward, we were into the encore. The audience roared its appreciation, and Grand Archives treated us to two more
songs: one original one, and then a cover to close, of the Associations "Never My Love," a perfect fit for their sound and style, and they nailed it.

The packed-to-the-gills Crocodile filed out, hugging the sweaty band members as they left the stage and glowing from the fantastic show. It was just so evident: This band is going to be huge.