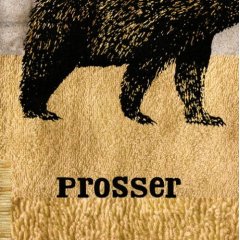 Prosser, the self-titled release from Seattle-based musician Eric Woodruff (formerly of Bellingham’s Delay) is a new and refreshing take on today’s alt-folk sound. The album runs through a gambit of different genres without ever seeming forced or manipulated. The quality of Woodruff’s musicianship (who plays every instrument on the album sans the occasional cello and keyboard) is evident in every richly layered song.

As far as basement recordings go, you would be hard pressed to find an album of such superb clarity and production. Each of the 14 tracks on this album have a distinct flavor, each subtlety touching on different emotions and feelings as they drive through. Some tracks pull heavily from straight-ahead folk reminiscent of later Neil Young (“Kind Words” and “Someday Soon”) while others infuse quirky guitars and unique melodies, such as the song “I Met A Girl,” which floats like a witches brew of the Pixies, Wilco, My Morning Jacket, with a pinch of the Jesus and Mary Chain.

Woodruff is a rarity in today’s music: a musician who can transition well between tempos and moods on the same album without it sounding contrived or uniform. “State I’m In” is one of the albums strongest tracks and one that showcases all of his talents – lyrical poignancy, musical ability, and emotive craftsmanship – all in one gentle, chilly breeze of a song.

“A Worthy Seed,” the album’s opener, is a very good indictor of what’s to come. Blending almost (should I say it?) Freebird- like guitar melodrama with smoky vocal poetics, this is a true testament to the power of Prosser. An album of a lesser caliber would ultimately come off sounding too blatant and phony. Elements of Woodruff’s former project, the sweeping spacerock outfit Delay, are found sporadically throughout Prosser, most notably the atmospheric backdrop on the track “Today.”

Prosser is a delightful album full of a wide array of sounds that will appeal to many types of listeners. It’s hard to find an album that doesn't fall victim to the occasional gaping hole between different experiments. Prosser is surprisingly airtight; it's an album that delivers as much in the moment as it promises in the future.