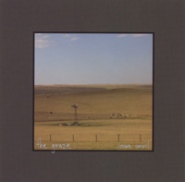 It's quite inevitable to compare this one man band (Seattleite Louis O'Callaghan) to Nick Drake, Elliot Smith and Grant Lee Phillips… so, there it is. I'll also say he's definitely got some Thom Yorke action going on, BUT, the quiet, melodic simplicity of The Graze's debut album Iowa Anvil creates its own world, comparisons aside.

I want to start by talking about track number four, "Maudlin." Holy lord, I have not had the hair on the back of neck stand up from a song in a long time. It clocks in at a scant 2:41, but what a slow burn. Starting with melancholic softness, he murmurs, "But what do I know? It's all just noise without you…" He desperately pleads for lost love, without a stitch of irony, just straightforward despair. Not a song to listen to when you have just broken up with someone, unless you are a masochist, then by all means go for it. Actually, if you are really going to go for it, balls out, then listen to the whole album over and over again until your eyes are puffy, you've called you're ex and hung up 17 times, you've lost 10 pounds from not eating and all you can think about is how good it used to be and then get really pissed about what a fucker he/she was and start the fun all over. If you are in a happy relationship, or happy about being single, you will have a different spin on Iowa Anvil. You'll appreciate his tentative, agonized voice and the beauty of each heart-wrenching song.

This album is obviously a labor of love, figuratively and literally. O'Callaghan perfectly captures the horrendousness of a break up: the stages of anger, sadness, anger again, desperation, bitterness, sadness again, anger one more time (most likely in the form of a big, fat "fuck off!") and finally acceptance. It is understated and simple, a perfect blend of bittersweet. The final track "Imbecile" serves as the final piece in O'Callaghan's story… "and I don't want to see you again."