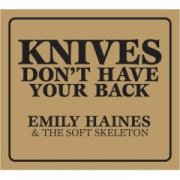 The Knives Don’t Have Your Back

Being the sort of guy that I am (i.e., indie rock nerd), I fall prey to the predilection towards indie rock chanteuses, so it is relatively easy to see why I fell for Metric as hard as I did. Not only is Emily Haines disturbingly cute in her pert dresses and punky hair, but she also has a sort of indie rock "come hither" voice that can pretty much melt hardened steel. So, when she struck out on her own (sort of) it would seem to be a slam dunk (well, as much as any Canadian anyone can slam dunk anything). Haines and her Soft Skeleton do indeed produce quite a captivating album with The Knives Don't Have Your Back but it never really gets into your head as much as Metric does – which I suppose is a tall order – however it can be quite a seductive album.

The Knives Don't Have Your Back is, on the surface, Emily Haines softer, gentler side. Gone on the dance-rock, post-punk songs like "Combat Baby". Instead, the music is very subdued and piano filled, somewhat similar (but less disco-influenced) to Haines' fellow Montreal scenemate (and erstwhile bandmate in Broken Social Scene) Feist. The album opens with "Our Hell," one of the more Metric-like songs, driven by Haines' hushed vocals and echoey pianos intertwined with minimal keyboards and percussion. You can't quite make out what Haines is exactly singing about other than it is confusing, but then again, maybe that's the point here. The general somber mood grows on one of the stronger songs, "Doctor Blind," an oddly John Lennon-like piano ballad that drifts along like the drug-addled narrator of the song requesting if the dizzying highs don't subside overnight/Doctor Blind, just prescribe the red ones. It is when Haines' pays attention to her lyrics, which can be horribly clever, that she sounds her strongest. Case in point is "The Lottery," a song that might be the most cohesive on the album with a sexy, languid arrangement that wafts behind Haines cooing There's a new crime, sexual suicide/there's a new crime, let's commit it. Haines comes across as Casey Dienel's evil twin on "Mostly Waving" where her vocals are spliced in with a Burt Bacharach-style horn section and dark, sinister organs and a funeral-march beat. The Achilles' Heel of The Knives Don't Have Your Back is that a lot of the songs just tend to blend into one long, depressing piano-and-vocal mix. There is nothing really breaking the songs apart on their own and although Haines can be charming, she just can't carry 11 songs worth of Tom Waits-like laments. This is exacerbated by a few songs just stay too quiet for their own good and overstay their welcome, such as "Winning," "Crowd Surf Off a Cliff" or "The Last Page" march on for four+ minutes like lost Nick Cave dirges.

As much as I love Emily Haines, I just can't warm up to The Knives Don't Have Your Back as much as I would love to. It does have its moments when you can feel that Emily is putting it all together, but far too much of the album feels like someone going through the numbers. That being said, it might be unfair of me to try to compare something like The Knives Don't Have Your Back to the obviously differently imagined realm of Metric but that's what happens when musicians strike out on their own: they either have to stand out or just become a footnote in the discography.