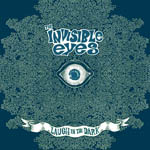 Laugh in the Dark

Seattle's own Invisible Eyes fear not the rock. Like mighty Viking warriors wielding their battle-axes of rock, they don't ask to come in, they just kick the door down. You'll never know what hit you.

You need a number of fundamental pieces to truly rock, in order: (1) guitar, preferably loud and distorted; (2) drums, preferably thundering and relentless; (3) bass, preferably driving; (4) vocals, preferably raw and genuine. Take pieces 1 through 4, mix with a killer organ sound and, heck, for good measure, toss in the tambourine of the gods*, and you've got rock with a capital RAWR. This is what you get from the Invisible Eyes. This is rock intended for dark, dirty nightclubs filled with the youth and the rebellious. This is what the Vines wish they were and what Mooney Suzuki tried to be. Laugh in the Dark channels the best of lo-fi sixties psych rock and roll and serves it up to you fast and furious.

The album's opening number, "Revelation" greets you with visceral guitar distortion that sets the tone for the disc. It is followed by a tremendous low, snarling organ line (brought to us by Janet Hurt) and throbbing drums. Lead singer/guitarist Aubrey Nehring seems to channel Iggy Pop from his Stooges days or the Seeds for the barely discernable vocals, but it is apparent that it's not the lyrical content that drives the Invisible Eyes. Instead, the visceral growl of the band's music dominates the palette and the lyrics become a piece of this ominous painting. "Mother of Mystery" is dominated by swirling organ and crunching guitars as Aubrey howls, "Drive me out of my mind, mother."

One of the more toned-down songs on the album, "Monster Blues," has excellent interplay between the guitar and organ that captures the ghoulish feel of song. "Funny Feeling" has one of the few organ solos you'll hear in any disc released this year. The appropriately titled "Cyclone" swirls with an increasing ferocity as the guitar growls its way into the song's tight organ line. (The organ, in my opinion, is the most under-utilized instrument in rock short of the electric zither and the Theremin. So that's why all I seem to be able to talk about is the organ. Trust me, though. Once you hear it, you'll wonder where it has been all your life). The same can be said for "Tired Night", where the wall-of-sound is most apparent; it almost feels like the song got lost on its way to Pet Sounds and found its way to the wrong side of the tracks. Taking a more MC5 type path, "No Words" clocks in at a brief 1:39 and sounds like a train speeding by backed by an infectious bass (Ian Barnett) and finishes with Aubrey vocally riffing off his own guitar solo.

There is a tendency on Laugh in the Dark for a bit of repetition in song style and structure. That's why "That Old Song" is a refresher, with a staccato, Bo Diddley-like beat to the guitar and drums. The foot stomping is better translated in the live show where it can feel like the whole club is going to come down. "Luanne" slows things down, with an eerie organ line that backs Aubrey's plaintive, "Tell me if you can, Luanne/please please take my hand, Luanne." "Don't Wanna Go" would sound perfect as the soundtrack to a 1960s film about the dangers of tough, rock and roll gangs, or possible delinquent females (think Switchblade Sisters). They add just enough variety to the disc as to not make Invisible Eyes seem like a one-trick pony.

What can be noteworthy about the Invisible Eyes is how they can make it seem like the 80s and 90s never existed, instead we proceed directly from the underground punk of the 70s to 2006. Bands like Invisible Eyes are built to do one thing: play loud rock and roll. It's what we all need sometimes, like a return to our primal roots and realize that deep down, nothing gets you more excited than music that's meant to be played loud. Laugh in the Dark will fulfill that primordial urge. Don't be afraid. (Oh yes, and did I mention the organ?)

* please note, when you see Invisible Eyes live, pay close attention to Donnie, the finest tambourine player, well, ever. He could very well become the Seattle version of Ben Carr.